March 2nd is the first day of Lent for us.  There will follow  7 weeks of strict fasting.  Some of my family do the fast but not as strictly as the Orthodox church demands.  They just cut out the meat but eat still eggs, meat and dairy.  We usually do the same.  Just stop eating meat during Lent.

This last Thursday was a big meat eating day, 11 days before the great fast.  It is called Tsiknopempti which loosely translated  means 'smokyThursday', the smoke and wonderful aroma coming as the fat from the bbqed meat  hits the coals.  The whole island has some sort of grill, outside of shops, on the waterfront, in the schools, at the petrol station, on the beach as everyone follows this tasty tradition.

Both the Primary School and the Lykeio had grills in the courtyard of the schools with free souvlaki, pork grilled on a skewer, for all the students.  The Lykeio had a disco as well. 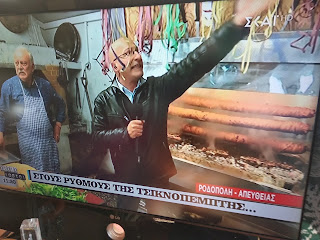 In Athens the grills were fired up early in the morning especially in the main meat market.

It's the middle of carnival still so there's dancing, and music as well.  In days of yore we used to dress up and go from house to house in the neighbourhood, have a drink and a forkful of meat and on to the next.  This custom was already dying out back then in the 80s and I doubt anyone does this now.  However, there is dancing in masquerade at tavernas and hotels and in other parts of greece there are traditions which still play a big part of this day.

My husband being a very traditional person we always dressed up in some sort of costume, homemade.  Papou's old jacket and cap, Yiayia's apron, my wedding dress was used on several occasions, the priest's long black gown.  Sometimes we just toured the neighbourhood, sometimes we celebrated at a taverna and at least once we went bar hopping.  We still have a bag of old clothes for carnival but it is the grandchildren, and their parents sometimes that dress up.  I first met one of my sons-in-law at carnival when he came into the house dressed as a female of a certain trade.  How could I not like him?  He was  another happy revelling greek. 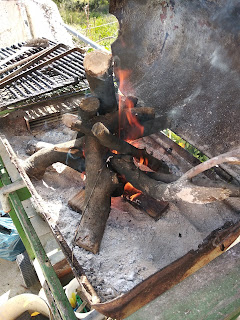 Our grill has been lit 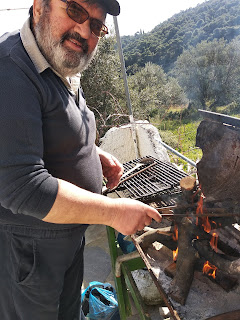 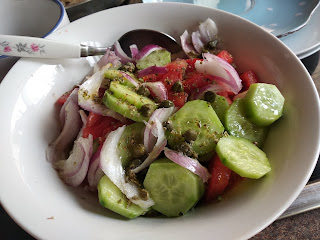 There was a big greek salad as well as the meat, and a bowl of tzatziki.  Bread and wine and all was well.  And then someone had a bright idea and I had to go out to the gas stove and fry potatoes.  They were a darn good accompaniment though 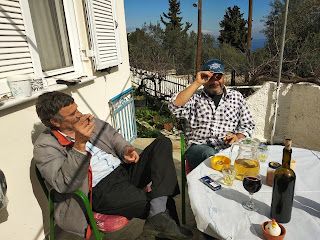 It started off as a sun-shiny day but around 2 a black cloud came over and starting raining on us.  We  moved quickly indoors.  The meat was cooked and already half  of it was eaten 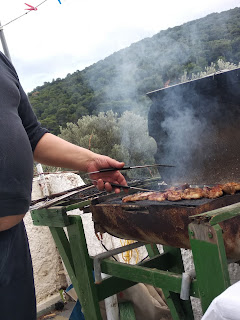 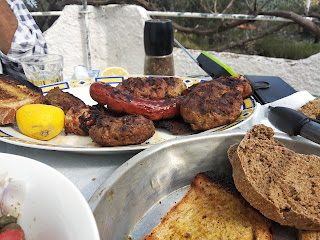 And on the table
Homemade bifteki (hamburger), a greek sausage, liver and some pancetta.   Most of it got eaten and we had leftovers for lunch today.

Email ThisBlogThis!Share to TwitterShare to FacebookShare to Pinterest
Labels: Tsiknopempti