2015..austerity All Blacks and more 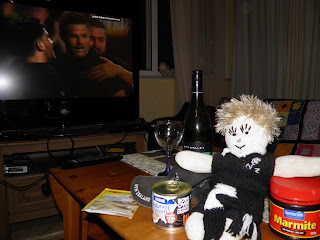 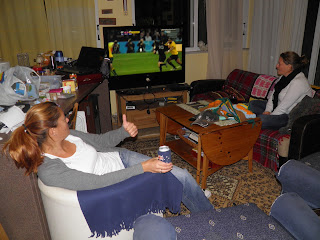 ALL BLACKS - DANAE AND ELLI

What can I write that I have not already written  during this long year, last year and the year before. Economic ruin was on the cards for the first six months.  Worse than the years before, but with the usual outcome.  A last minute bailout saved Greece from bankruptcy but the threat is still there to keep the masses toeing the line.   Our stockpiles of macaroni and toilet paper gave us supplies for the next few months.  What we saved on food and hygiene products we gave to the government in the hope that we wouldn’t lose the roof over our heads.    January 1st will bring more pension cuts, from 10-25%.  Our family are still able to pay all their taxes and we are grateful for that.  I hope I can still write that at the end of 2016.


Refugees and asylum seekers took first place in the news in the second 6 months.  In previous years refugees from Afganistan and Pakistan arrived in the thousands on the greek islands.    This year asylum seekers, mainly fleeing the war in Syria, have topped the half million mark.  You’ve all seen the news reports and horrific photos.
Thousands are still arriving each day on greek shores crossing the 'sea of death' between Turkey and Greece.  Seas are rough, bodies are washed up daily on greek beaches.  Borders are closing as fences and walls are built all along the refugee route to restrict and control the huge numbers of people passing through.  Refugees are stuck in the freezing cold for days or weeks before they continue on to Europe.  Athens has opened up its Olympic stadiums to accommodate those who want to wait out the winter.


And terrorists creep through to bring terror in Paris and all of Europe.``

At the moment there are an estimated 7,000 on the northern greek borders.  Last week Iranian men sewed their lips together in protest at not being able to cross into Skopje.  Yesterday it was a war of stones with the police and bona fide refugees who are allowed through the border.  A Moroccan migrant was electrocuted whilst attempting to climb on top of  a train.  Why a Moroccan?     Was his life threatened in Morocco or was he just in search of a better life and trying to get into Europe via a back door.

Syrian families who can qualify as genuine refugees are the first to be allowed through to continue on their long trek.  But young men from Pakistan, Afganistan, Iran....and Morocco are the majority on the borders.  They are the irregular migrants who are stopped from continuing and they are the trouble makers.  They are fighting between themselves and with police. All of them are supposed to have been photographed and fingerprinted but what does that do really.  At least one of the Paris attackers came through the island of Leros.    Whose is to say if they are genuine refugees or a threat to peace in Europe.  Young men are deported regularly.  As soon as they set foot 'home' they are off again, on their way back to the refugee trail.

After the incident between  Russia and Turkey the 'Csar' and the 'Sultan' are insulting each other and making threats which I hope they do not carry out.  Russian ships have been stopped from sailing through the Bosphorous and out into the med.  Turkey has stopped providing fresh fruit and vegetable to the Russians.

Turkish war planes invade Greek airspace a dozen times a week.  As the Greek PM said, 'thank goodness our pilots are not as nervy as the Turks.'

A blessed greek monk, named brother Paisios, who died in 1994, left behind him Nostradamus type predictions.  One of them was that Russia and Turkey would go to war and Turkey would be wiped off the map.  Whilst he says Konstantinople (Istanbul) will be returned to the Greeks, something they have been waiting for since its fall  to the Ottomans on a Tuesday (a most unlucky day) in 1453, it would also mean a war on our border.  Peace brothers.

Greek chemists, hospitals, the employed and the unemployed are out on the streets striking and protesting.  Farmers have warmed up their tracters and are blocking roads.  Our local school still has not got its full quota of teachers although the schools opened in September.

Big businesses are moving across the border to Bulgaria, Skopje and even Albania where life and taxes are cheaper.    We've all gone back to shopping at the Chinese 'emporiums'.  Galatas across the waters has  a large store where we find cheap clothes for all the family.


Our days here are still sunny and bright but the nights are getting colder.  We lit our wood burning stove for the first time last night.  The neighbours have gathered most of their olives and we have a 17 kilo tin of fresh olive oil to keep us going for a few months, plus half a ton of fresh olive wood. 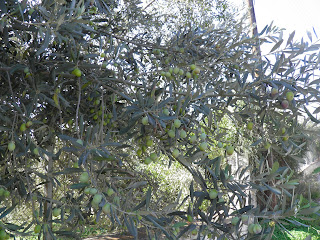 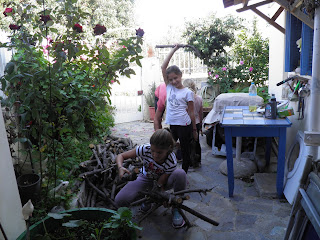 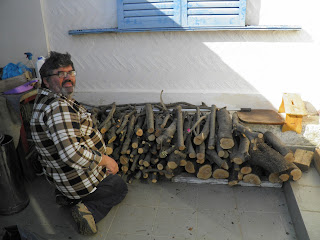 K STACKING THE WOOD AT THE BACK OF THE HOUSE

The grape harvest went really well, especially considering that most of the grapevines in our area were under water for months after flooding last December.  For the first time Kostas did not get any grape juice and has not made his own wine.  We buy a few kilos from our neighbour as needed.  An extra tax has been put on wine and there was a huge uproar.  Politicians did agree that wine was not a luxury in this country but a tradition.  A few glasses of wine are drunk with every meal . Fiery  raki cleans out the rust and warms the blood, a necessary 'medicine' not a luxury.


The winter was wet, the summer was hot.  We all grew a year older.


“May calm be widespread, may the sea lie smooth as greenstone, may the warmth of summer fall upon us all”.

as usual all the types of type face have been used, much to my bewilderment.  One day I will get it all the same, I hope.
Posted by local alien at 06:53:00 1 comment: