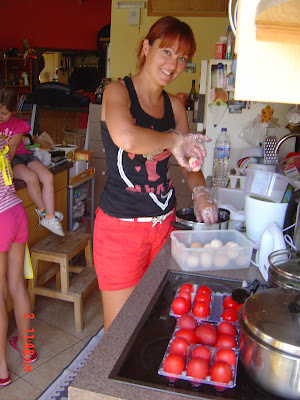 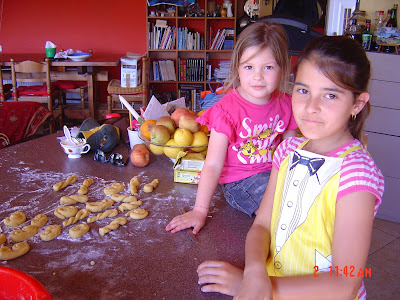 mushrooms and kalamari, pruning and Lent

A few months ago on one of our 'hospital trips' into Piraeus I bought a bag with holes in it from which mushrooms were supposed to 'sprout'.

And sprout they did.  We got two good harvests  of 'plevrotis' which I gave to E and D and had a few ourselves.  I don't know what their name is in english. It is a flat, flower-like mushroom.  Not my favourite actually.

What happened to the last of the mushrooms -

Danae flours the mushrooms and fries them in olive oil.  E and D will tell you how tasty they are especially with an ouzo or a beer.  We were with the grandchilldren  in the garden, digging purple-patched- potatoes, clearing weeds and doing  housework.  We didn't even get a whiff of what was up. Just the smell remained and a couple of dirty glasses.

A few more dry spindly ones have appeared through the holes in the plastic bag but are not growing .  The 'little greek girls' can buy their own mushroom bags next time.

Time for a recipe - a Lenten recipe.  I am cooking kalamari with olives.  If you like kalamari then try it.  They are easy to cook and are quite tasty.

This recipe was given to me by a village woman when we lived down in Crete .

First clean your kalamari.  A bit of a nuisance but easier than cuttlefish.  Or you could I suppose (downunder) buy a bag of ready cleaned and cut squid.

I had to rip off the tentacle bit, cut out the hard 'beak' , pull out the plastic-like backbone, clean them with water and cut them into rings.

some kalamari
1/2 cup olive oil
handful of stoned olives
one onion
as much garlic as you can stand
1/2 cup of wine
pureed tomatoes - preferably fresh, grated
lots of chopped dill - the cretans use a similar herb called 'maratho'.  Not sure what that is in english either
salt and pepper

Put the kalamari rings, and  chopped onion into a pot with the oil. Add the garlic and olives (I use stoned olives now but when I first started making this dish there was no such thing as 'stoned olives'.  I had to stone a handful of local olives and it was a very fiddly job) .

Fry gently for five minutes.  Add the wine, pureed tomatoes , the dill and salt and pepper.

Boil till kalamari is soft.  Shouldn't be more than half an hour.  My kalamari were really big ones and don't seem to be softening.  I shall just have to let them stew.

nb: the kalamari did eventually soften and they were damn nice and far healthier than fried.  I did not use half cup of oil, more like two tablespoons.


We were given a huge pile of celery by a cousin.  I parboiled it and put it in the freezer along with some more carrots and dill.  All these are a necessity in a lot of greek cooking.  Bean soup and fish soup need carrots and celery.  Peas need dill.  OR ELSE (k won't eat it).

Must write an email to Tony and let him know there is lots of boiled celery for when he comes to visit.

WORK IN THE GARDEN -

We have pruned the bougainvillia and K pruned the roses almost down to their roots.  I used to complain about how much he pruned the bougainvillia - not anymore.  The darn thing grows too fast, too high and there is too much to prune and burn at the end of the season although I trim it continually during the summer.  The thorns are huge and very sharp.
He has left just the skeleton and there is a huge pile to burn when the winds die down.  We have till the end of April to burn .  After that all fires are forbidden.

He pruned the lemon trees as well and the roses. The thorns on those branches are just as sharp and painful.  We pulled out some of the sorrel in the front garden.  There was mountains of it.  I pulled and pulled and it came out in huge handfuls and there was more and more.  There is a huge bag of sorrel and that was just the beginning.  The compost filled up a long time ago.  I love the green of the sorrel but this year it has choked everything else in the garden.

The grapevine was pruned a few weeks ago and I cut up the branches to be used on the bbq and the wood burning oven.

Piling up those bougainvillia branches and making a bonfire with them is a terrible job.  We always come out with huge cuts and slashes.  And the damn wood just will not burn – except with petrol or oil!  Everyone is doing the same thing at the is time of the year with the olive branches,  The more you prune an olive tree the better it grows.  Big branches are great for the winter fireplace but smaller ones get burnt where they fall and they are green and need petrol.  All over the valley you’ll hear the ‘whoosh’ when someone puts on the petrol and see huge flames go up and lots of smoke but then it dies down very quickly and you need more petrol.  We can only burn till the end of April and the smaller branches can ‘t be left under the trees because they attract some sort of nasty insect.  What everyone needs is a chipper but most olive trees are in remote and rocky places.

We had octopus and scallops, mussels, crabs, giant beans, various types of shrimp, sea urchins, macaroni with shrimps, halvas, laganas (flat bread) of all different sorts.  I made 3 with sourdough.  TaramOsalata (made with taramA), lettuce salad and  more.

Sea urchins are a protected species now and you can't collect them at all - so says the law.  K's cousin went diving some where and got a few bags of them and of course gave some to us.  We should have gathered them from our local beach, the damn things are such a safety hazard when swimming in the summertime.

The inlaws came from across the strait and brought the shrimp and crab, more flat bread and a box of sticky baclava.

Flying kites is a tradition on this day but it was freezing and then started to rain.

Our neighbours dropped in and brought us dessert, chocolate souffle and homemade halvas, plus we had Nota's baclava.

The next day we took the leftovers down to K's sister Dina.  Her husband Vangelis has parkinsons and doesn't move about much.  They didn't come up so K took the party to them.

I spent most of the next day cleaning up.

Why this blog turns out in half a dozen types of print I cannot fathom.  I type it all in the same lettering and it looks the same on the draft.  Darn computers.