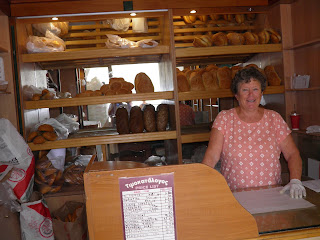 Catherine (Katerina) in her fresh bread shop  on the waterfront next to the meat market.

This is the place for the best assortment of your freshest daily bread or the traditional koulouri or sesame seed roll that every greek loves to eat in the morning. She also sells paximathia, bread which is sliced and baked for a second time till hard and dry.  Next door are her cheese, spinach and other little savoury pies.  Her husband's family have been selling bread from this same shop for many, many years.

Catherine's English is excellent of course being another local-alien.

Paximathia -
twice baked bread made traditionally from whole wheat, rye or barley flour. Nowadays they are found in bags in the supermarket baked with olives, oregano or oil and made with white flour. In shops like Catherine's you buy them by the kilo.

My mother-in-law would make them now and again, slicing her sourdough bread and baking it again in a slow oven till hard and dry. My father, being a naval man, would have called it hard-tack. 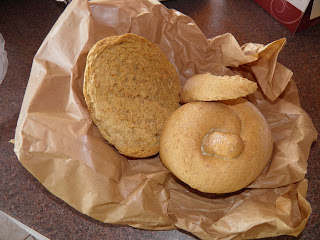 Everyone in the Greek family loves these, or just chunks of plain old stale bread, especially for dunking in sauces or mopping up the oil and juices at the bottom of a plate of greens. Sometimes fresh fluffy bread just does not make the grade.

My father-in-law would take these with him when he was away in the fields or working far from home. They last forever, don't go mouldy or stale and are an extremely healthy meal with a handful of olives, a raw onion, a clove of garlic and fresh oregano or whatever wild herbs you can forage. Mediterranean diet at it's finest.

You do need to dip them quickly in water or even wine before eating them otherwise they are so hard you'll break a tooth.

In Crete they are a speciality called dako which I have written about before. The big round ones they call 'koukouvayia' or owl.  The Cretans spread grated tomato , lots of their own virgin olive oil, feta or some other strong local cheese over them. 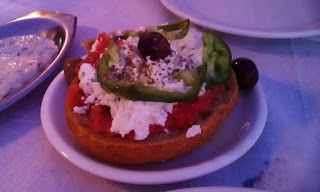 Cretan dakos, a photo I have posted before

They are also great broken up and put on the bottom of the plate under a Greek salad. The crunchy little pieces absorb all the juices and oil from the salad and are delicious.

Don't confuse them with friganies which are also twice baked bread but much thinner and crisp not hard. The Greeks love to eat these for breakfast. K prefers them with a light covering of honey or homemade jam, without butter or margarine. 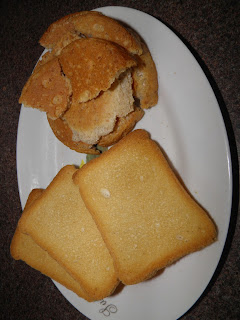 Friganies.  They are rather fragile and as you can see break up easily, usually just as you're spreading the butter. A plate of broken dried bread is not my favourite way to start the day.

While trying to come up with an English name for these fragile slices of dried bread I came upon Dorset knobs. Made only during the months of January and February and used in a throwing competition on the first Sunday in May. So what on earth are these, Elaine?
Posted by local alien at 19:34:00

Email ThisBlogThis!Share to TwitterShare to FacebookShare to Pinterest
Labels: Paximadia