St Paul's Anglican Church Athens annual Xmas Bazaar.  This bazaar has been going since 1953.  When we lived in Piraeus in the 70's it took place in the British Embassy.  That was a few light years ago before terrorist attacks and anti-american reprisals.  A few years later I couldn't even enter the British Library without having my handbag searched and the children's pushchair examined.

The Christmas bazaar became my annual dose of British culture.   Homemade Christmas stockings, xmas crackers, chutney,  yuletide cards, all things I had not seen for years along with so so english accents and manners.  And english books, piles and piles of english books, second hand and cheap.

This years bazaar was a special treat for us all.  Since the economic crisis began the long car trip to get in and out of Athens  has not been worth it.

On Sunday we left the island on the 7am car ferry and returned on the 7pm.  It was family fun with our two daughters and the oldest grandaughter. 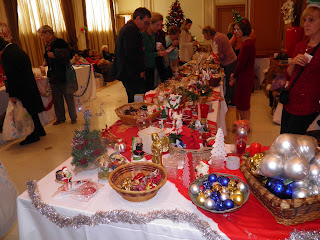 We  entered to a true xmas atmosphere, the tune of Noel Noel, an english accented voice on the loud speaker asking the owner of a red Austin Mini to remove it or have it removed,  a table full of prizes and books of tickets for the tombola, a white elephant stall with tempting little knick-knacks and the sight of christmasy decorated tea-tables full of satisfied early bargain shoppers enjoying a cup of tea and a scone or a mince pie.

No Greek voices, all the signs in English.  It was me who was on home turf this time. I did the ordering, explaining and translating. 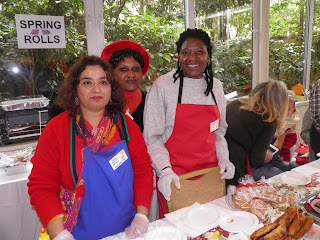 The friendliest  girls on the refreshment table. 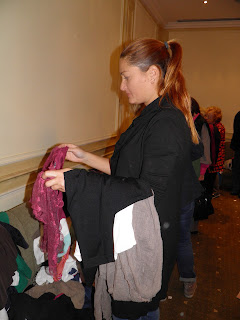 The 'griwis' are like bloodhounds.  Danae went through all the 'pre-loved' garments,  neatly arranged the piles of clothes, and come out with two big bags of bargains for all the family, many of them from Zara or H&M and costing only 1 or 2 euros each. 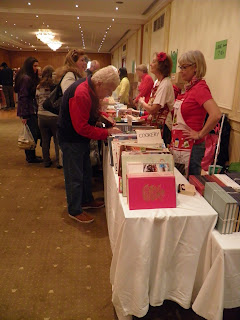 The book stall must have made the most money.  When I first arrived the book hunters were 2 deep along these tables and no-one was leaving with less than one bag of bargain books.  By the time we left half the books had disappeared.  For 50c a book they were a real bargain.  I bought a dozen but would have happily spent another hour there jostling for a front line spot and finding another couple of dozen. 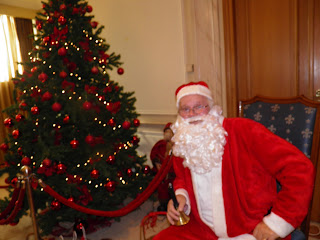 No Christmas  festivity can take place without Santa.  He wasn't very busy when we passed by and was happy to have his photo taken - for free.