While I ate my frigania (greek crispbread), covered in marmite, I pondered this morning on the marvel of these savoury sauces and decided the world needed yet another article promoting marmite,
and vegemite,
it's downunder cuz.

Both are pungent flavoured salty pastes, black as tar and just as sticky.   Both are a yeast extract made from what is left over after brewing beer.

-  Spread it sparingly on your morning toast.
-  Make a Marmite sandwich.
- Add a teaspoonful to your gravy.
-  Marmite and cheese go together.. or vegemite.
- They are a pleasant addition to an avocado sandwich
- or try a marmite/vegemite and walnut sandwich.

If you live in  Australia or NZ then you were probably brought up on one of the two. If you weren't then you'll wrinkle your nose in disgust at it 's sharp salty taste.  'Like it or  hate it' is the marmite slogan.

You could say it is an acquired taste, acquired from birth.
We ate marmite on toast for breakfast, took marmite sandwiches to school, ate boiled eggs with marmite soldiers and made canapes to go with our sherry
- small squares of  bread spread with marmite, covered with grated cheese and grilled till the cheese melted.

A jar of marmite was always in the cupboard, on our table.  Marmite because in NZ  kiwis made their own version.  Across the Tasman sea the Australians were doing the same with vegemite. 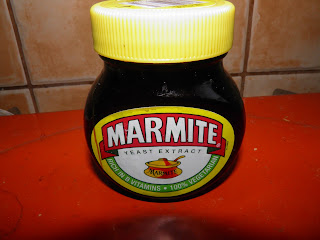 Has been produced for over a hundred years.  Twenty seven jars are sold every minute.  Starbucks in the UK puts it in it's paninis. Try  a chocolate bar which contains 98% milk chocolate, 2% marmite or a marmite easter egg.

2007 a spread was produced with 30% Guiness yeast apparently giving it an enticing hint of that famous Irish stout.

2008 the company produced marmite with champagne for
Valentine's Day

2016  Brexit brings a threatened increase to the price of Marmite as the value of the pound drops. The english resist 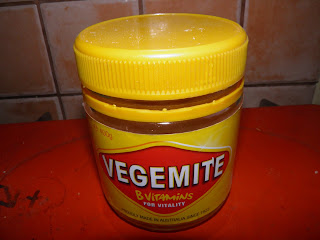 After the first world war marmite was hard to find downunder so Australia made its own and called it vegemite.

We're happy little vege-mites
As bright as bright can be
We all enjoy our vegemite
For breakfast, lunch and tea

Last year Cadburys in Australia updated their Caramello chocolate by mixing in some vegemite. 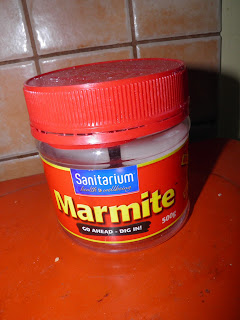 NZ marmite made by the Sanatarium Health Food company (Empty jar.  In proud place on the mantelpiece..or it would be if we had a mantelpiece)

NZ has been making its own marmite since 1919.  The marmite factory in NZ is in the city of Christchurch which suffered a series of severe earthquakes in 2011.  The factory was deemed unsafe and in 2012 announced that it's stock of marmite had run out and for some months would not be able to manufacture any more.  In the panic that followed there was a run on the supermarkets and the 'crisis' became known as marmageddon.  Production restarted in 2013 and supermarkets restricted customers to two jars of marmite a day.  The kiwis do love their marmite.

I brought my two children up on marmite and vegemite, whatever we could scrounge.  My (griwi) grandchildren devour marmite (or vegemite) on toast for breakfast.

'Statistics say' that 25% of Britons take a jar of marmite with them when travelling.

Vegemite is as well known  world-wide as koalas and kangaroos.
There is even a wiki-page-thing on how to use it. Australians definitely take a few jars when travelling.

This kiwi expat loves both vegemite and marmite.  Whatever you have in your local supermarket just make sure you put a few large jars in your suitcase when you come to visit.  A marmite/vegemite drought is a dismal time for our family.  One jar will not do, we are three families now, and we all need our daily dose of  this salty black spread.

(And don't forget a bag of pineapple chunks.)

This post is dedicated to all my fearless Marmite and Vegemite suppliers . My heartfelt thanks to all of you in NZ, Australia and Britain.
Posted by local alien at 06:14:00