Is Europe still high on your holiday list?  How about Greece.  Those picturesque greek islands shimmering blue and white in the summer sun, are they still a desirable destination?

The EU has brought Greece to its economic knees and kicked over the ouzo bottle.

Turkey and Russia are firing thunderbolts of insults at each other.  How long before the barrage of mere propaganda becomes warheads instead.

Thousands of  hopeful asylum seekers are still arriving on greek islands every day.  Samos, Chios, Leros, Lesvos, Symi, Farmakonisi, Kalminos, Gavdos, Amorgos, even Santorini, Crete and Mykonos.    Poor little Kastelorizo only 650 metres from the Turkish shore and 300 inhabitants has been over run .  Kos, 5 kilometres away from the Turkish coast, has the locals rioting in protest at the construction of ‘reception’ centres.  These will ruin tourism they say, their main source of income.

Skopje (Macedonia) is building a second fence along its border with Greece.  Macedonia, the only entrance point from Greece to the rest of Europe, now allows  entry to only Syrians and Iranians with proper papers.  Today there were 80 let through the border, yesterday 200. Thousands wait and protest.

Detention camps, are being built around Athens.
Many think concentration camps on the islands  of Yarra and Macronisi should be reopened.  Political prisoners were held here during the military junta.

Border crossings  into Bulgaria and Albania have been closed by farmers objecting to new  measures which will triple their social security payments.  Lines of tractors have blocked  all  main highways for over ten days now .  Bypass roads are closed for hours every day.  Greece has been cut into pieces.

General strikes occur on a regular basis.  Even little Galatas, across the water, held a protest march. Car ferries, water taxis and fishing boats cruised in the straits on a 2 hour stoppage.

Rumours are spreading that large numbers of men have been recalled to the armed forces, there will be a general call up, the 6th Fleet is  patrolling the Aegean and the greek navy and coast guard are on high alert.   Just rumours now, but they are being discussed over coffee in the cafeterias and it is making us all feel a little insecure.

NATO ships have been sent to the Aegean to deter human smugglers sending migrants from Turkey.  Their role is simply to patrol and prevent ‘illegal activities’ at sea.

Schengen agreement.  The free passage of European citizens from one country in the EU to another.  Greek citizens can travel to other EU countries using only their ID card.  The latest threat is that if Greece cannot control its borders  they will be expelled from the Schengen area.


Winter has been so warm the almond trees are blossoming two months early.

But.   The olive harvest was bountiful.  Vine yards produced plenty of wine.  Our lemon trees are bowed down with fruit.  We've burnt half the amount of fire wood we used last year.  No rain, means no flooding, no mould. 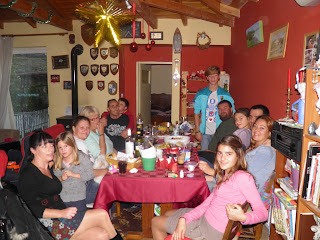 FAMILY AND FRIENDS AT CHRISTMAS 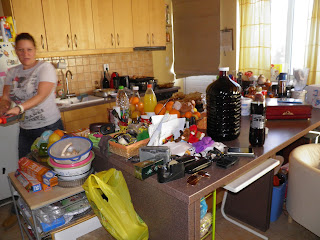 WINE IN A PLASTIC BOTTLE.  20 KILOS OF YIANNI'S WINE NEXT TO THE
OLD 1 1/2 LITRE COKE BOTTLE OF WINE 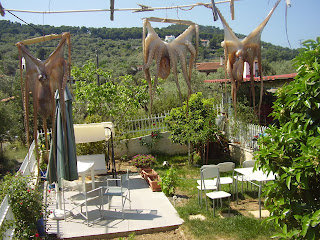 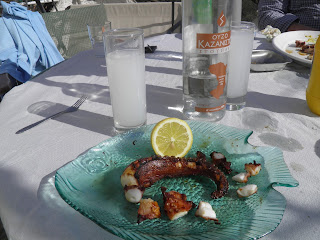