I am having my first outing tonight to listen to the navy band playing a waterfront concert. I'm like a new mum , in the olden days, allowed out into society after 40 days and a blessing from a priest.
I have a blessing from the blood doctor. My important blood levels are all normal. Still got a few wonky ones but that's because I still have a blood clot the size of a baseball on my upper leg. Nothing like the over inflated balloon it was a few weeks ago.
I went shopping this morning and even stopped for a quick capuccino at the 'green chairs'.
The meltemi is blowing, a very brisk wind, from the north. Yachts were untying one after the other and making for the open bay to anchor safely away from other boats.  In port the yachts that remained were literally bobbing about like corks.
Now I'm having a siesta, supposedly, and enjoying a nap with the cool meltemi, no need for fans or Aircon.
The cicadas have stopped screeching for a while. It's amazing the silence when they stop their noise. We get used to their endless 'cacophonic chorus'.  The peace when they stop is palpable.
Does this mean summer is coming to an end?
My trembly legs mean I can't walk too far so we are taking the free little bus a few stops into town from the big harbour parking lot.
Poros is still full but not full on crazy. Our shopping this morning was a not battle through the aisles. There was bread left on the shelves at 10am and plenty of tables available at the 'green chairs'.
The quiet cool airs, and roads of September are almost a reality. And this is the first time I have actually felt like writing a blog post. I have been living in limbo for awhile interested neither in rumpled beds, dirty dishes, the food on my plate nor a posting of my blog. 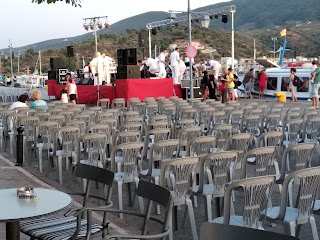 All set up and ready to rip. We were there early and got a good seat but not ringside. Enough noise without being that close

They were playing greek songs from the 60s. It was a long night

We've been asking for a mirror for the end of our road for months and it has finally arrived.  The big trucks delivering to the fish farm roar past the top of the road.  We have to poke our noses out to see if the way is clear and there have been a few close shaves. 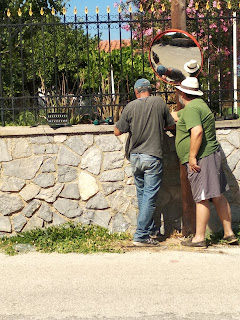 The council arranged for the mirror arrived, we arranged to get it hung 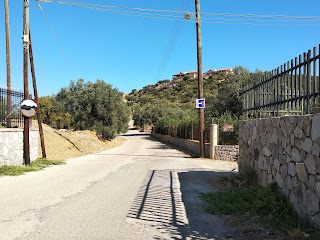 At the same time we got a 'dead end' sign
Quad bikes and scooters sometimes roar down our road looking for a way to the beach and then a few minutes later noisly drive back up the slope in low gear.  At 3pm we've been jolted out of a sleepy siesta.  Just not on!

Now all we need a dozen or so STOP signs around the island so tourists, and locals, know exactly who has the right of way.  Where  a small back  road meets another small back road it's survival of the fittest, or the quickest.

I'm not the one crashing.  I am starting to feel a little better, maybe get a few blogs together after this.

Last week a helicopter crashed into the island's main power wire between us and the mainland.  3 killed, instantly.  The heli pad is not a heli-pad but a piece of open land and the high voltage cable though known to all the pilots was dangerously close.

Galatas, the village on the mainland was without power for a few hours but ours took almost 2 days to be fully restored.  Everyone swung into action though.  A power outage mid summer season is a catastrophe.

The Navy Base has it's own generator.  The background lights are those of the village on the mainland.

Half a dozen police cars were sent over to patrol roads and guard banks and any other businesses whose alarm systems were suddenly shut down.

All main roads were closed.  The power wires came down across the end of the main harbour road, fortunately not causing any more causalities

The army brought in 8 emergency generators which started giving electricity to the main tourist areas by next morning.
Not us though 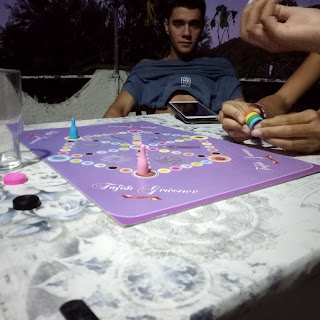 Fortunately the days were cooler so we didn't need fans or aircon.  Some of the grandkids came up and we played old fashioned boardgames.  This is a quiz game, in greek, with some very odd questions which only I could answer, to the amazement of said grandchildren.

How many Oscars did Spencer Tracey win?
Who???
I guessed 8 but he had won 9.  Almost got that one

It was into this strait that the helicopter crashed, missing yachts and other water traffic

Too late, but the new wires will have some sort of warning signs attached to them and no helicopter will be landing here unless the piece of open land can be made into a safe and legal heli-port.  That goes for all these sorts of landing places all over the country.

Too late for the pilot and passengers.
R.I.P.

I'll be away from blogging for at least another 10 days.
Went in for a simple procedure to stop my arrythimia and ended up staying almost a week.
Procedure is called 'ablation' and is usually only an overnight stay.

Good news is the procedure was one hundred percent successful and I no longer have an irregular heart beat.

A couple of other things happened along the way and I need time to build strength and get completely mobile.

A blood vessel burst, aneurism,  in my leg and  left a huge blood clot covering the top of my right leg which has to slowly be absorbed. A bit uncomfortable. The leg has to be kept largely immobile.

After 2 blood transfusions I finally had the strength to walk from hospital bed to car and after a 3 hour road trip, I'm home. Hurray.

I was lucky. Instead of waiting 5 months for the op there was an empty spot after 2 weeks

A specialist was immediately on hand. Everything was in place to save my life. Grey's Anatomy a la grec.

Arrythimia is a thing of the past.

I spent 5 days of a heatwave in a perfectly controlled environment.

It all happened near 15th August. Athenians have been deserting the city in their thousands since the beginning of the month. Roads were empty so driving in and out of the centre was a cinch.


My two girls created a perfect environment for my return. I tottered into a cool clean atmosphere with a whiff of grilled burger! Ftoo ftoo ftoo my dears

So see you all soon.

There's a rush of cars and people, but it's midsummer, what else to expect

15 August is Greece's biggest holiday, the country closes down, as it does all over Catholic europe
We're revving up for a month with the holiday masses

This weekend as thousands of athenians leave for the august holiday we are having a heatwave.
Hot air is being pushed up from Africa. Teheran and Baghdad are cooler 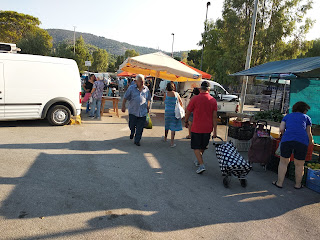 A rush at the Friday market.  We were there at 8am to get a better selection 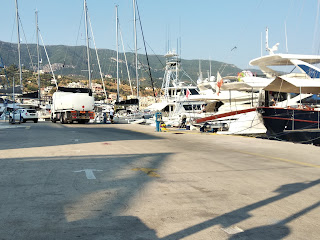 Early morning fill-up for the luxury yachts.  The only people stirring on these are the crew. 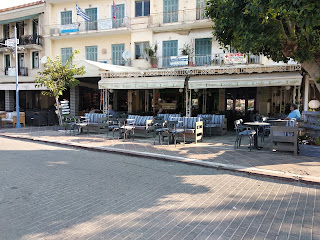 The cafeterias along the waterfront are mostly empty 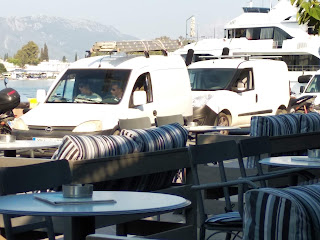 Everyone stops for coffee, the plumber and the electrician double park to pick up their takeaways 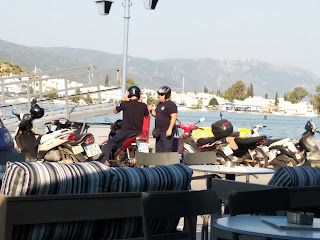 Even the police are in coffee mode before heading up the back streets to their desks.  They are both wearing helmets.  Good boys.

We stop for coffee too.  Eleni winds down the awning because it won't be long before the sun is blazing in onto the tables 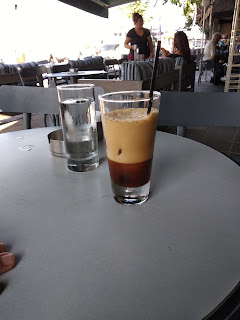 An ice cold freddo espresso for me.  More ice than coffee 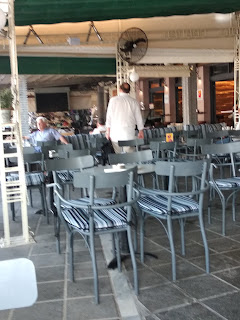 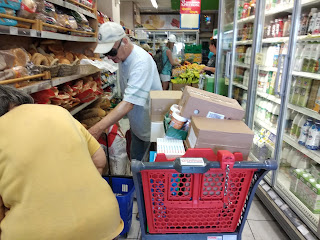 9 am and I'm in the supermarket, or I would be if I could get in the door.  They're still filling the shelves while the customers try to shop.  Two lots of yachties have trolleys piled high and I rush to get to the checkout before them 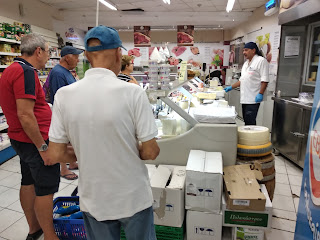 Tassos at the deli counter has half a dozen in line for orders.  I don't bother

Got some bread, beer and milk and I'm out!!

We brought the car down a few days ago and filled up with every necessity we could think of.  I hope we don't have to shop for anything but bread till the end of the month.

Lemons have been falling off our trees, sounding like cannon balls falling in the middle of the night.  I pick up about a dozen every morning.  We have given bags of them away but still have many kilos all over the bench, in bowls and filling the fridge.

Time to have a freezing frenzy.  Juice to make into icecubes, juice to freeze in bottles in the fridge and it is time to make fresh, sharp summer lemonade 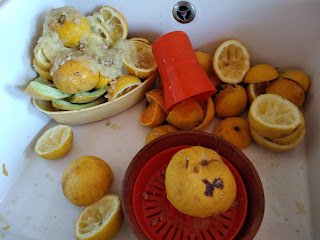 First squeeze your lemons
I squeezed a helluva lot more than these.  The compost was full

Put into a bottle or jug and keep in the fridge

It should keep for a few weeks in the fridge, maybe more.

Put one part lemon syrup and 2 parts water into a glass.  Top up with lots of ice

Do the same thing with grapefruit or bitter lemon juice.