In Greece this fruit is called the Lotus fruit.  Elsewhere you know them as persimmon ( or have never heard of them at all). 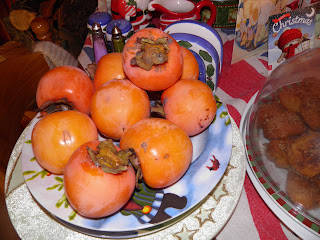 According to Wikipedia these are considered to be berries.  Damn big berries 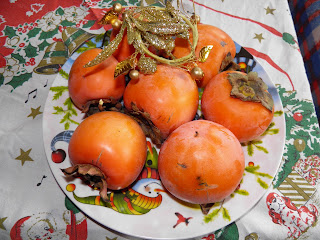 Neighbour Vaso came in for a smoke and a raki and brought us a bag of lotus-es/lotoi
They can only be eaten when really soft and ripe, are not very sweet and are sort of slimy. If you try them before they're ripe they are tart and stick to the roof of your mouth. Not nice. 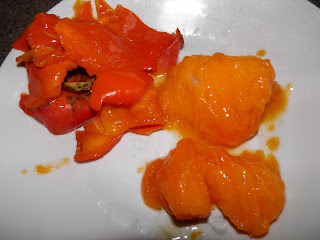 I peeled two and ate them but next time I think I'll cut the top off and eat it with a teasppon.  This is not a fruit I would buy but when you're given them then they must be used one way or another.

The name persimmon means food of the Gods.  The lotus eaters turn up in Greek mythology.  Odysseus on his return from Troy was blown to the island of  the lotus eaters.  Some of his crew ate the fruit and a dreamy laziness and forgetfulness came over them.  They had to be dragged back to the ship and tied up till they slept off the effects of the lotus fruit.

The persimmon I ate did not put me into a drugged, indolent state but I wouldn't have minded if it had at this time of a very cold winter.  Once again no one else wants to eat them so I'll have to finish them all by myself or make jam which no-one else will eat.

Vaso stayed for a little more than one raki and a smoke.
Mind you, she was talking most of the time. Vaso knows everyone. She knows their family lineage. It is amazing how many of the people on the island she is related to or bound to by koumbaria (being godparent or  best man/woman at a marriage). You have to be careful not to gossip about anyone, they could be family.
The stories of her tough childhood are endless. At seven years old she was working

to help put bread on the family table, gathering greens from miles away to sell on the waterfront, washing and cleaning for a neighbour.

The most interesting thing I  learnt was that only the front feet of the goat are used for soup.
78 year old Vaso drank us all under the table and walked home a lady  4 hours later, stumbling only a little as she tottered up the hill. 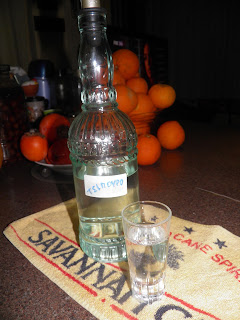