HO HUM, ANOTHER YEAR GONE, ANOTHER ONE TO GO 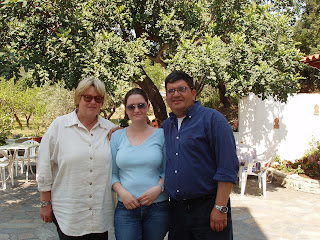 Me Elli and Kostas 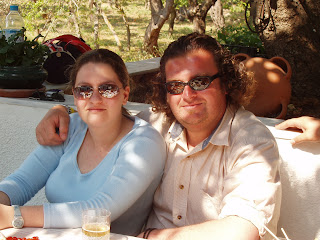 Elli and Kyriakos - in the days of his long hair 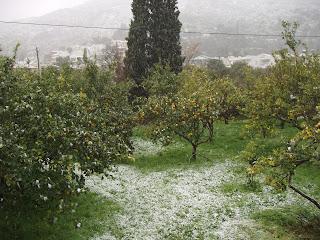 snow on Mike's orchard on Poros - a few years ago 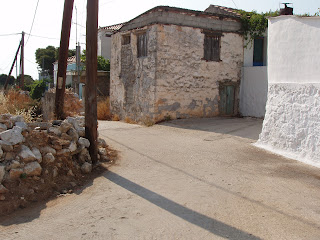 the old house on the island of Angistri where K thinks his grandfather lived
We didn't have snow for xmas.  The weather got a little warmer, if wetter. One day in early morning the sea was steaming.  Quite a sight.  We had a very busy, noisy, family Christmas with turkey, pig's head and a lot of wine and sweet and sticky things.  All the children and grandchildren were here plus quite a few others.  They had a wonderful time playing a long and loud game of  'Uno' - cards most of the afternoon.  I entertained the littler ones and the men drank and ate until the final fall.  They all left early evening and K had just a neighbour for company.  Kostas managed to stagger from table to armchair and the door bell rang to admit a cousin.  He left them drinking whiskey and went to bed.

The next day he blamed the bottle of his 2008 red he opened and two bottles of our neighbours very aged red for his sorry state.  It wasn't properly bottled and it was not good for his stomach.  The bottles of 2009 and 2010 and Yianni's 5 gallon of red were fine though. LOL

The turkey stuffing was from a recipe from ABC Perth - online newspaper.Traditional aussie stuffing it said.  Much nicer than the greek one I have made in the past with mince and chestnuts and finely chopped innards.

IKEA had free brekkies in the week between Xmas and New Year.  That shows how bad the economy is.  If we aren't shopping at Ikea we aren't shopping anywhere!  We were tempted to go and have a free brekkie but it would have cost us 50 euros for petrol, another 35 for road tolls and ferry boat and we would have had to leave home at 6am.  Kostas didn't think it such a good idea though Elli and I were ON!

I made a load of chicken liver pate and then a chicken heart omelette with the hearts that I found amongst the livers.  Sounds horrific but the finished products were quite tasty.  It would have been even beter if someone else had done the cutting up and cleaning of those horrific main ingredients.

Danae's children went around the town on xmas eve carol singing and made a lot of money.  They did it again on New Years Eve - special carols on each occasion - and made even more.  Danae took them into Athens to stay with their aunt for a week after New Year and they managed to spend a little.

Jamie went with one of Elli's friends and pretended to sing a few carols and picked up 30 euros!  All you have to do is look cute.......and visit relatives and friends!

George is still playing tennis and football. He used to train with the Galatas team but has now moved to the Poros team.  The Galatas team is called Theseus, the Poros one Poseidon.  Nels plays tennis too and goes to dancing lessons.  Busy little bees.  Danae was worried about what they were going to do over the winter months on Poros.  They have a full schedule.  George is going to Athens on Sunday to play against other teams.  We took him to Nafplion once - some of the boys playing looked about three years old and they were darn good too.

Nels was in the xmas dance pageant.  Those little girls were good entertainment.  One of Nels dance routines was done to tune of 'It's Raining Men' and there were a few not-so-well known xmas carol tunes as well.  Danae, Elli and I sang along with them all.

Natalia is a 'terrible two', has tantrums when Jamie takes her toys or jumps on her - well, so would I!  But she is the original 'dog in the manger' and as stubborn as a mule!  When she's asleep she's as cute as an angel!

Have to mention the other grandchild - Lydia.  She's a real whirl wind and was in her pre-school xmas show too.  She's afraid of nothing and as bright as a button - except when she first wakes up!

We have planted lettuces, celery, spring onions, rocket, parsley and dill.  Hope the snails let them grow.  Otherwise the wild sorrell reigns out front and bushes of unknown weeds out the back.

I started writing down our xmas menu but it looks very short and sparse - for us.  I must consult the kids, there must have been more.

Pigs head roasted in the outside wood oven.  Stank like boiled pigs feet but the real greeks loved every garlicky morsel.  Didn't roast the ears, the butcher cut them off.

Pork leg.  Also roasted overnight in the outside wood oven.  Very Fatty.  I must have thrown out a plastic bag of fat and thick skin the next day when the leftovers were cold and had congealed.  I get all the good jobs!

Turkey, stuffed and roasted by me.  It was a nice french turkey with a pop-up thermometer.  Not one of those running-round-the-yard-yesterday ones hanging in the meat market still  with the heads and feet.

Perth stuffing with breadcrumbs and bacon.

Gravy - without the gravy mix I brought back from Australia.  Elli forgot to bring them.

brussel sprouts - frozen, though you can get fresh at this time of the year

cheese salad - a feta cheese sort of dip (instead of tzatziki)

chocolate walnut cake made by Elli - the very best!!!

wine from various neighbours and relatives

whiskey for those that stayed the longest

Next day we had a house full of left-overs and I made pies and soups all week trying to get rid of it all.

HOPE EVERYONE HAS GOOD HEALTH, THAT WEALTH IS ACHEIVABLE AND THE HAPPINESS IS AS YOU WISHED FOR
XX
Posted by local alien at 03:06:00 No comments: