Burning the May day wreath.

24th June.  Midsummer in some countries.  St John's eve here in Greece.  It is the day we burn the May Day wreaths.

IN THE OLDEN DAYS
The wreaths were burnt in a fire at crossroads and kids jumped the fire to be free of fleas for the summer.  This St John was known as 'St John-of-the-fleas.  Very soon there is another St John celebration.  At the small church of this St John the children crawl through a small window into the church and leave some underwear behind and are assured of good health for the coming year.  Son-in-law Kyriakos left some underpants there quite a few years ago.

YEARS AGO we did burn the wreaths out in the road and had a street party with a bbq, meat on sticks (souvlaki) and cold beers.  Now the fires are forbidden and our neighbours disagreed with the smoke from the  bbq on the street so we have a family and friends party and throw the wreaths on the rubbish.

It is solstice of course, the longest day and shortest night.  Always seems so weird to have the longest day at the very beginning of the summer.  It is daylight now at around 5 am and gets dark at 9pm.  But the days will be getting shorter from now on.

The blog post before this on greek austerity/poverty/idleness
is just one of many I have written since 2010.  Same old-same old.

May Day wreath photos are old ones but you'll get the idea. 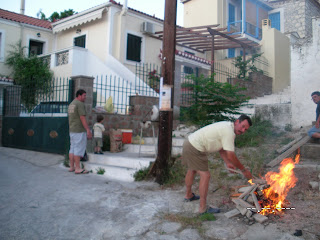 LIGHTING THE FIRE IN THE OLDEN DAYS 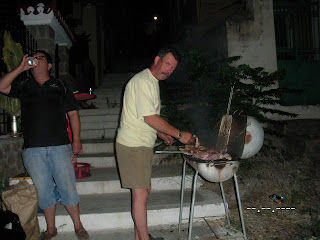 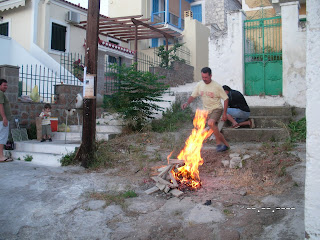 ABOUT TO JUMP AND BE FREE OF FLEAS

Email ThisBlogThis!Share to TwitterShare to FacebookShare to Pinterest
THE WAITING GAME

Greeks are tired of this continuous/al game.  Europe is tired.  Once again we are under the threat of the direst poverty.  We are waiting while the Eurogroup/ the Brussels group/ the Working group/ the IMF and our PM play chicken with each other.

Will Greece go bankrupt/reneg on its repayments/stick its finger up Merkel's nose or buckle under.

Last night we had a few bottles of home made wine, the fried innards of our neighbours goat and my homemade bread and laughed it out while we once again waited for news.

No news last night, no news today.  It's going to be another lastminuter.  Monday is Payday to the IMF, Monday is the last day of our 4 month reprieve.

Our neighbour has stored 100 packets of macaroni and the same of tomato sauce.  Plus kilos of rice, beans and lentils.  I have about a third of that stored away as well plus 2 months supply of loo paper.  I hope we'll be eating this macaroni with a rich  bolognaise sauce and lots of pork chops and moussaka.  We always get bailed out....only this time it is touch and go.  If we don't get bailed out any visitors please bring cheese.

Here on Poros we are the lucky ones.  If the electricity gets cut off we can cook on the bbq, plus we have a gas burner and 2 big gas bottles.

K has his fishing boat and even if he can't afford the petrol to go fishing he says he can fix up a sail.  We eat 'weeds-from the-fields' anyway. Stinging nettles are extremely healthy They just need a bit of rain.  There are dozens of snails in the garden and all greeks love boiled snails.  Vasso, our old greek neighbour told us when she was young they often survived on lemons and boiled carobs.  Her family was a big one and they lived from their goats and what they grew in the fields  .  Exactly what we'll be doing soon.  The carob tree next door is loaded, we have a walnut tree, lemon trees and the bitter orange tree is loaded.

I already have 25 kilos of flour in K's shed and a tin of oil.  We'll be fine.  Wine may be a problem but our neighbour has promised she'll give us a few bottles and Danae's family has a few barrels.  K's wine has turned sour in the summer heat.  We will have plenty of vinegar.

Meanwhile down on the party island of Myconos they are breaking open 12,000 euro bottles of champagne.  I hope they are at least paying tax on that. 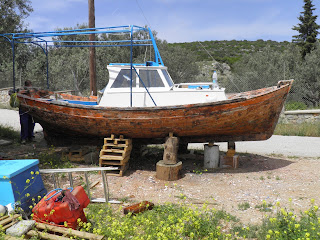 K's boat under the olive tree.  He had it up here outside the house for almost 6 months.  Here it is after having the paint burnt off. 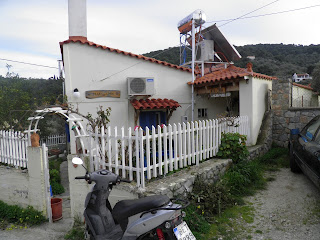 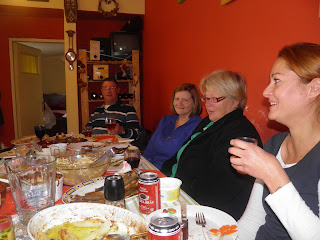 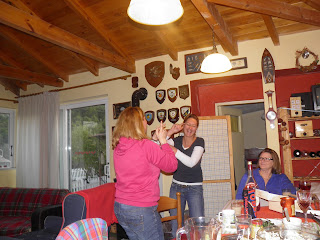 the girls - Elli ,Danae and Karen 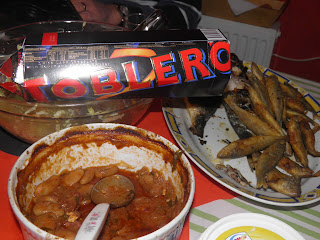 The holy bones of Saint Barbara have arrived in Greece from Venice where they have been held for the last thousand years.  St Barbara, or part of her, was welcomed with state honours by the Archbishop of Greece and will be on display for two weeks before being returned to Venice in a frigate of the Greek Navy.  More than 200,000  so far have waited in long lines for hours every day to worship the relics.

The lines outside the church of St Barbara in the suburb of St Barbara in Athens are made up of Greeks of every age and social status.  It is not just a crowd of the elderly or the lame.  Young and old, everyone is there waiting patiently.  There will be the usual prayers for health but also no doubt quite a few prayers for a job or a little wealth to ease the tax burden and quite a few pleas for a bit of commonsense and logic for our political leaders.

The church is at the same time collecting medicine, either those that people have at home and no longer need or medicines and supplies that they buy and donate.

Greece is green and warm and mainly dry.  If only this weather would continue for the rest of the summer.  May is the best month of the year to visit.  The weather is warm enough to sunbathe although the seas are cold.  And the temperatures are perfect for sightseeing.

May 20th is Lydia's name day  and May 21st is the fiesta of Saints Konstantinos and Eleni.  The name day of Kostas, daughter Elli (Eleni), sister in law Dina (Konstandina), Nels (another Eleni) and her other grandmother Eleni and a few other aunts and inlaws.

It used to be a HUGE celebration.  Pigs roasted on the spit, baking dishes of lamb and potatoes, crates of beer and barrels of wine. And crowds of locals, friends, relatives, neighbours and acquaintances who knew where they'd get a feed.  It would start about ten in the morning and go on till  the wee hours when someone would have to carry the main celebrater off to bed and I would try and get rid of the stragglers and start sweeping up the debris.

Everyone brought bottles of expensive whisky, the best ouzo, boxes of sticky cakes and even a few items of name brand clothing.  K usually gathered in enough whisky to set him up till his name day the following year.

This years party was a very modest affair.  We had  a  leg of lamb roasted in the oven.  This had been given us by a friend who has sheep and slaughtered some over easter.  Then  some roast potatoes, greek style with lots of lemon juice, garlic and oregano.  Tzatziki, greek salad and bread.  Wine only and that from a friend's barrel.  Ours is finished.  There was feta cheese as well but I forgot it and it stayed in the fridge and wasn't missed.  What a difference.  But 'everyone' had a good time.  A neighbour and his wife and a friend of mine plus a short visit from one of K's nephews with a son-in-law and a stopover by another neighbour on his way to someone else's party.  Good company and good wine, plus a few olives, that's all that is needed 'so they say'.....now.  And it turned out to be true.  It was even warm enough to sit outside surrounded by the grape vines on the balcony.

K still managed to get 2 bottles of whisky, one of ouzo and a box of sticky cakes.

Today June 3rd is a big fiesta across at a tiny church beneath the lemon forest on Galatas.  The road leading to Galatas is lined with stalls selling any sort of junk you could think of from knickers to toys to bags and underwear plus the 1 euro stall where everything's a bargain. Local entrepreneurs (I have no idea any longer how that word is spelled) cook whole spit roasted pigs which are dismembered and sold by the kilo, wrapped up in greasy paper.   And 'loukoumathes', a sort of donut fried and covered in runny honey syrup and cinnamon and even chocolate covered nowadays.  Yum.

Little water taxis load up and chug across full of people from around 5pm when the church service starts till the early hours when the music stops.  The little taverna there brings in a big name singer and sells their own roast pig and cans of beer.         We used to stay for a few hours and K probably still would if not for the economic crisis.  Chairs and tables are set up in the sand, beer is sold by the can, pig is served in grease proof paper with plastic forks and paper twists of slat and pepper.  You are supposed to go and light a candle at the church before starting your shopping or merry making.