Bird's custard.  A British tradition it appears.  Like Watties tomato sauce in New Zealand or vegemite in Australia.  You can't live without it.  Well, you can, but you dream of it's taste, and miss the comforting familiarity 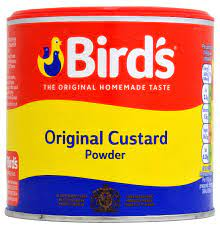 I was discussing these things over coffee last week with an english friend and it occured to me that xmas is coming and Santa delivers in different ways these days.
I googled 'Bird's Custard Greece'.  Of course there are half dozen places, in Athens , that will very happily courier the delicacy to me to xmas wrap for my friend.
I ordered the custard and the owner of the business phoned me and told me in his soft burrrr (english, scottish??) about his site and all the goodies he provides.  Including he said, fresh parsnips.  He had just returned with a few kilos after a trip to the UK.  I declined the parsnips.  Not my favourite vegetable.
I thought I had better take a closer look at the site. OMG he has real sausages and pies, christmas crackers, hob-nobs, cheeses, mince pies and puddings.  At a price, but not an exorbitant price.
I shan't be ordering more just now.  Xmas is expensive enough already but early next year I'll be getting some of those sausages, for me and my kiwi-greek daughters.
Just thought, Easter!  He will have real hot cross buns.  Crumpets!
I'll be like a kid in a toy store, or a chocolate factory.
BIRDS CUSTARD
The original powdered, egg free, imitation custard powder.  Created by Alfred Bird in Birmingham, England.  Ingredients, cornflour, salt, colouring, flavouring.
Posted by local alien at 23:51:00