The greek island of Naxos is the largest of the Cyclades, a group in the southern Aegean .  It's known, around here, for it's potatoes, easter goats and lambs (ready for the spit) and it's cheeses. 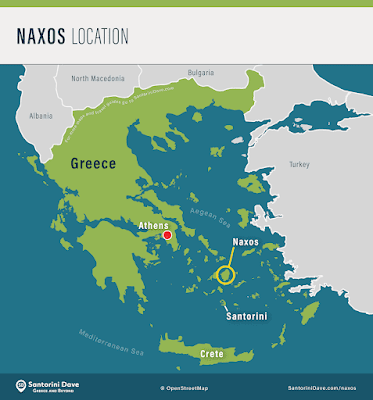 I noticed, a few years ago, that temperatures on Naxos were some of the lowest in the summer and the highest in the winter.  I see the tourist blurb promotes its mild winters and cooler summers.  They are right.  If I had a choice I'd move down there right now.  I'd live on local potatoes and sample all their cheeses, bask in the warm winter sun and spend the summer reading under the shade of my, one, olive tree.  Don't want to overwork myself.  One olive tree will do the trick.

My last posts complaining about grey skies and foggy mornings reminded me of Naxos.  So go and visit when you're here.  Arrange a rental car when you book your hotel and go and see the sites.  I'm sure you won't regret it.  Eat lots of roast lamb, fried potatoes and nibble on cheese with their delightful local wine.

I've only been to Naxos once, in 1980, with my brother and wife.  Both she and I were pregnant with our first children.  Back then we stayed at a pension.  A room with a bed,  toilet and shower down the hall.  No aircondition or even a fan but with the mild summers I'm sure we didn't need either.  All I remember is being accosted as we got off the ferry by someone touting his rooms, normal back then before Hotel.com and tripadviser.   We followed along after him and they were quite close so there we stayed.  We wandered around the town, ate at a taverna overlooking the main drag where we could watch all the Naxos beauties pass by on their perantzatha (evening walk) and swam at the sandy beach near town.

It's a big island, a lot to see but you need transport.  There are little villages, monasteries and Venetian castles.  At the entrance to the port is a small island called Portara, the gate, and there stands an ancient marble gate. 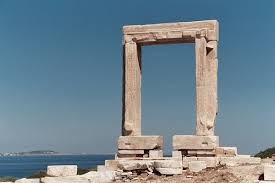