Look at this narrow lane

The little truck had to back about 100 metres along the narrow lane.
The driver didn't stop, hardly even looked back.  He's backed up here quite a few times before
As usual google has managed to put half of these photos in the wrong place

Unloading at the other end.  It was flat here and the table and couch only had to be carried a few metres

Two chairs on the quay waiting to be carried onto the car ferry and across to Galatas.  The people who owned the house have sold it and gone back to Blighty.  The remaining furniture and odds and sods were distributed among mainly the foreign 'locals' for a donation to those who look after the stray dogs

It really is just a little truck.  One of the smallest on the island that can negotiate these narrow back streets bringing supplies to the shops and carrying people's possessions door to door.  It would all have been done by donkey a few years ago

Athletic grandaughter brings down one of the armchairs 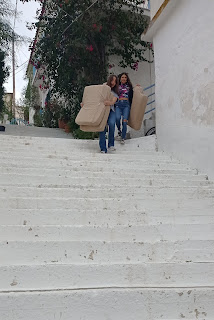 This flight of steps is the last stage.  First of all everything had to be maneuvered down another very narrow and steep flight of steps and do a sharp turn through a very narrow track between the neighbouring houses.  I don't know how  all the big furniture was carried up there.  The space was so tight and the steps so narrow. I would have bought a load of flat packs, though you'd still need to haul up mattresses, plus your white appliances 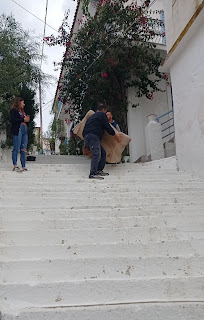 Down comes a big two seater couch, one which turns into a double bed. 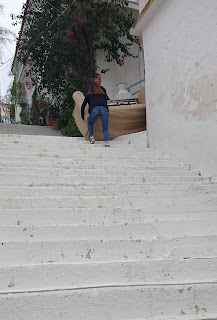 That couch has made it down the tight house steps and along the lane.  Angling it round that corner took  a lot of effort and a bit of strategy. 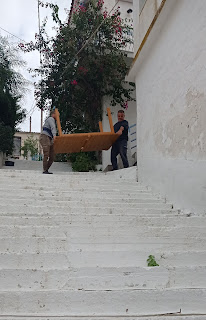 The table was heavy wood and weighed a ton.
There was a lot of groaning and sweating going on

The overseers
J on the left organised the clearing, cleaning and removal of all the household goods.
She ran the auction and made sure everyone got what they wanted without complaints or disputes. She also does long hours of hands on work with the strays.
She's a Poros treasure
.... And my bff

View from the balcony of the house.