Athens was shaken by a 5.1 earthquake this afternoon.  Quite shallow so it did a bit of damage.  Several old buildings collapsed and bits of masonry fell without hurting anyone. 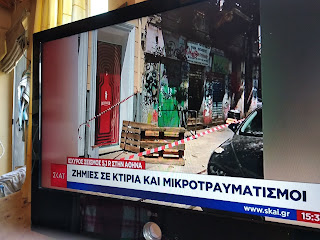 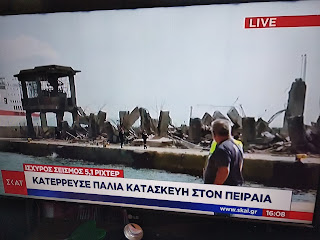 It's the first time in many years that I've actually felt that shifting of the earth.  I've been in several big earthquakes in NZ and in Athens.  When you're younger you just take it in your stride and carry on
'well, that was a strong one'

This time we were sitting in our favourite armchairs watching the news and getting ready for a siesta.  The first shake came and I was surprised but not actually shaken, then a few seconds later came an even stronger shake and that one did scare me.

If we felt it so strongly on Poros then somewhere else in the centre of the earthquake the buildings would be swaying and the earth rocking.

The first was 3.8 on the richter scale, followed by a 5.1 and then a 4.5.   K was on the phone to someone in Athens and the line went dead.  Power was out in many districts and phones as well.  20,000 calls were made to Athens seconds after the second quake, more than on New Years Eve.  We were advised to use viber and whatsap to communicate with friends and family, which is exactly what we were doing.

As I mentioned in yesterday's post I was living in Athens when a 6.7 earthquake hit.  Even with a small baby I didn't panic.  I'm sure I would now.  I'd run out into the street like most most people do but well away from walls, old buildings and trees!

What worries me most now is that the children and grandchildren are ok.  I hope that was the major quake and there won't be any stronger shakes.