Visiting day at the Naval Base.  The new recruits have had a week of confinement at the Base here, plus another week or so at the main marshelling station in Athens.  They used to spend 6 weeks here but now it's more like 3.  Learning to march, handle guns, peel potatoes, garden.  Basic training.

Every greek male is supposed to do time in the armed forces once they reach 18, with very basic pay. Time in the Navy was 2 years but it's down to something like 9 months now.  Not too much time to spend away from Mama but a nuisance if you're studying or starting a new job.  It can be delayed until after your studies and those escaping overseas can now get some sort of exemption.  They used to be nabbed as they re-entered the country and sent into the army.

Our oldest grandson has put his conscription off till he ends his studies in a couple of years time.

The 2 Sundays here at the base they are allowed out till 4pm.  A few hundred young sailors are joined by several hundred mothers, grandmothers, girlfriends and a few Dads all eager to fuss over their young boys.

We hadn't realised it was visiting day when we went for coffee and arrived at the lower gate of the Base to find young lads dressed in white flocking out into the parking lot, heading for the cafes and tavernas in town.

From experience we knew it was touch and go whether we found an empty table at our favourite cafe.  While K parked up I dashed for our cafe which is first in the line of harbour cafes.  I grabbed a table, not our usual one, but with a view of goings on and out of the sun.

The regulars were noticeably absent, either by choice or because 'their' tables were already occupied 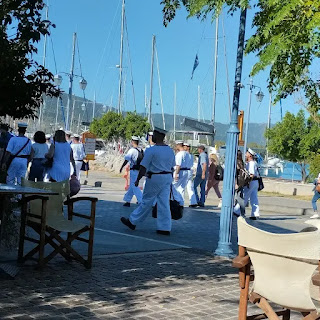