We had 14 hours 48 minutes and 13 seconds of daylight.  Tomorrow we'll have 2 seconds less.

Today, Wednesday, was the longest day of the year.  Odd to think that the days will be getting shorter and winter will be on it's way, although we won't actually notice any difference until September.

I have just been reading about those who today follow the 12 Gods of Ancient Greece, the Olympians.  They consider Greece to be under Christian occupation.  21st June is a day of celebration for them.  Their New Year began (begins) on the first new moon after the summer solstice. 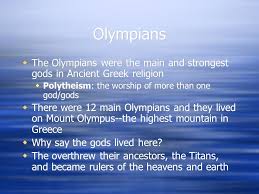 In ancient times there were processions and offerings, especially to the Goddess Athena, the Goddess of Wisdom, and the High Priestesses.   The ancient Olympic games began exactly one month after the solstice. 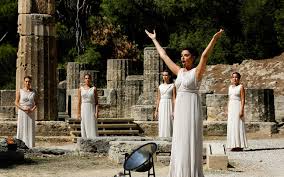 This midsummer solstice was celebrated everywhere from Stonehenge to ancient Gaul, Scandanavia, North and South America and China.

The solstices were a part of the circle/cycle of life.  Down in New Zealand they are celebrating the winter solstice and the rebirth of the sun.

This year in Greece the solstice really does seem to be the beginning of summer.  We have had weeks of rain and lower (not low) temperatures.   Today it seems the rain is over, temperatures are rising and our first heatwave is forecast for this weekend.

In a few days time it is the local fiesta of St John of the Fleas.  Actually the Greek orthdox church celebrates the  birth of John the Baptist.  It is also the day when we should burn our now dried-out May Day wreaths at crossroads.  A bonfire which young children jump over three times to be free of fleas and nits during the hot dry summer to come. 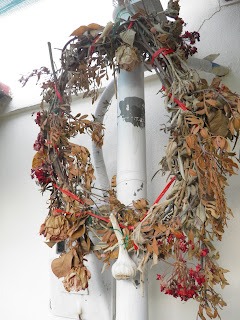 
We used to do exactly this years ago when the children were small but fire restrictions nowadays means that bonfires are forbidden.  20 years ago we used to build huge fires out in the street and kids and adults alike would drag out old furniture and planks of wood to keep the fire burning.  One year, the last I think that we were able to celebrate this way, not only did the firebrigade turn up but also the Mayor, to see what was happening. 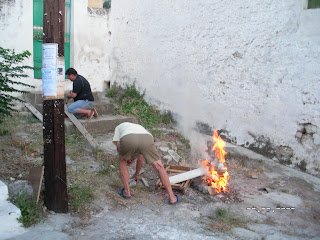 Preparing the fire and pulling nails out of old boards


The following year the Mayor took over our street party and it became more civilised.  Nowadays it is a festival of song and dance arranged by a group called the Poriotisses  (the Women of Poros).  Very tame.
Posted by local alien at 12:31:00

Email ThisBlogThis!Share to TwitterShare to FacebookShare to Pinterest
Labels: name days and fiestas