My Greek story. Part One

It is rather long so I'll break it up into two or three posts.

Born and bred in far away New Zealand I had to get out and see the rest of the world and all the relatives in the northern hemisphere.  Nowadays this is called the OE (overseas experience, I think) and almost every young person downunder has that same urge to get up and go.  Youth.

I just did not go back.  Not for 11 years.  Seems incredible now but after 3 years in London and 2 trips around the Continent (Europe) I found Greece and my greek.   I came out on holiday from London with a friend and found a job for the summer in a hotel on the island, working with my husband's cousin.  We visited Marthitsa on her name day. Word went round the neighbourhood in an instant that there were some foreign girls (think 'aliens') at her house and in another instant the funny little cave like house was filled with eager 'sightseers' peering in at us, including all the male cousins.  And that's how I met K.

At the time he was already in the Navy working on a destroyer and had a tiny roof top 'apartment' (think store cupboard with a bathroom) in Piraeus.  We married without his parent's blessing but for me it didn't matter, we lived in the city, a long way away.  With the first child came acceptance, even though it was not a boy.  My mother in law told me she would not have objected if I had a dowry, a house of course, which my brothers should have provided, unbeknown to them, when we married.

We married, had two girls and now we have five grandchildren.  Doesn't matter how long I'm here I'll always be a foreigner.  It's not just my accent, it is my whole way of thinking.

On children.  Back then every good greek wife was supposed to provide half a dozen sons and a couple of girls to look after their parents in old age.  In some places when asked how many children they had a mother or father would answer 'two children and a daughter' instead of 'three children'.

Just a note on the accent.  I always prided myself on my wonderful grasp of the Greek language and the masterly way I spoke.  Prick that bubble!   I heard myself on tape one day and couldn't believe the way I spoke, with harsh New Zealand vowel sounds and the way I tortured the pronunciation was excruciating.   No wonder my grandchildren laugh at my mistakes and my neighbour screws up her brows trying to understand.

It was, and I believe still is, difficult for a kiwi to stay here for any length of time.  I had to apply for a visa or leave the country every 3 months and re-enter to get permission to stay for another 3 months.  Twice I left the country taking the overnight ferry from Patras to Brindisi, getting an exit stamp and coming back on the next boat to receive another 3 month stamp in my passport. 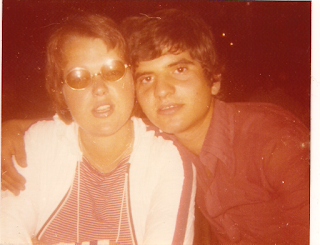 Yes, that really is us.  Love sick pigeons.

But we did get married and I got dual citizenship.  Citizenship and the marriage meant a lot of work.  So much red tape, so many papers to gather, from the embassy, the police, the department of immigration and references from the community.  A paper to say I had not been married before, translated offically by a women in  a grotty office up 5 flights of stairs in the middle of Athens.  Another paper from the church in NZ to say I had been baptised Church of England and could thus be married in an Orthdox Church without being re-baptised.  My mother just happened to be working as a secretary for some Church of England Bishop and arranged it quite easily.  I had a paper from our local Orthodox Priest to say..what?  I was a nice Christian girl?  I can't remember.   And finally I had to swear before a Notary and sign in triplicate that I would let my children be brought up as Greek Orthodox.

Meanwhile my mother in law, through some educated neighbour, had written a letter to my parents telling them to come and take their daughter back home.  They would find a nice Greek girl for their son.  On the wedding day the Priest almost backed out because someone had phoned and threatened him a with a lawsuit if he carried out the ceremony.  Back then Naval officers were not supposed to marry without the permission of a senior officer. 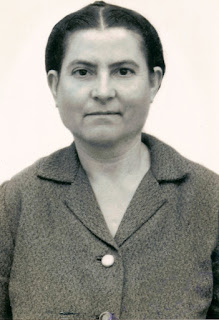 Kyria Eleni, my mother in law.  We eventually got to almost like each other.  It took a few years but I did come to realise that I really was an alien as far as she was concerned and I turned her known world upside down.


Reading all that I am gobsmacked that I am still here, legally married, 40 years later, with a Greek family!

Now with civil marriages between foreigners in places such as Santorini and our own 'Daskalio', the little heart shaped island as you enter Poros harbour, it has to be so much easier.

It is many years since NZ had an embassy here.  There is a phone number you can ring and a man in some small office will advise if you're lucky.