Aubergines with tomatoes, onions and garlic, a summer favourite around here.
When we were growing up my father grew aubergines for market garden.  Back then they were an exotic vegetable and we called them eggplant.

Imam bayildi is a turkish dish meaning 'the Iman fainted', either because the dish was so delicious or the cook used up an enormous amount of olive oil.  Aubergines soak up oil like a sponge.

I prefer my aubergines coated with flour and fried.  When done properly they are sweet and crisp and delicious

However, one of the traditional ways to eat them is with tomatoes and lots of garlic.  This is my version.

First prepare the aubergines -
- Use those fat purple aubergines.   Remove the stalks and cut them in half.  I then run a sharp knife around the inside of each half to loosen the insides.

I have never soaked mine in salted water as some say you should do to remove the bitterness.  Mine are not bitter. 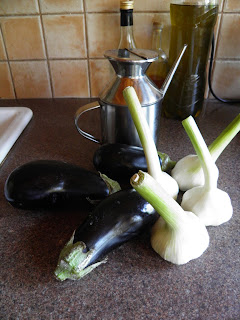 - Place the aubergine halves in a baking dish and sprinkle with olive oil.  Bake in a moderate oven for about half an hour until soft.

-  Meanwhile make the sauce.
For four aubergine halves you need about 2 big onions, cut lengthwise and sliced thinly .
- Put these in a pot with a cup of olive oil and four chopped garlic cloves.
- Fry it all slowly till the onions soften a little.
Add
- a tin of tomato chunks or 3 - 4 tomatoes grated
- a handful of chopped parsley
- a teaspoon of sugar to combat the acidity of the tomatoes
- salt and lots of pepper

- after half an hour take the aubergines out of the oven.  Scoop out the softened insides, making a shell.   Chop the insides and add to the sauce

- Simmer it all for fifteen minutes then pour the sauce over the aubergine halves, making sure they are full.  Let it pour over the sides as well so all the aubergine is covered. 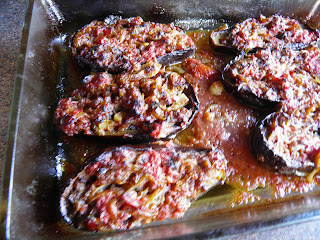 Serve at room temperature with feta cheese,  bread to soak up the juices and red wine to drink.

Another way to use the aubergine is to make it into a 'salad' which I would call a paste or a dip.  I have never found one of these 'salads' which I like.  When I do, I'll pass on the recipe.  Usually they are too sharp and acid-y with lots of vinegar and garlic.