Yesterday morning I was in short sleeves hanging out the washing on another beautiful sunny day.  By midday I was in my long sleeved fleece bringing in the washing and closing windows because of heavy rain.  An hour later it was freezing.  This morning it is snowing in Athens.  Winter has arrived.  The snow fields in northern greece are open.  Maybe the snow fields around here will be open soon too.  Just an hour and a half from Poros, folks.

All shipping has come to a halt because of very high seas.  This time it is not strikes which has brought all transport to a halt.  Mind you, it could be over by Monday.  The weather had better be a helluva lot better by Tuesday.  We have a road trip into Athens scheduled.  There is one water taxi going to and fro between Poros and Galatas with two ferryboat-men to hold it and the car ferry is going every hour instead of half hour.

Last night we had a visit from Kyriakos and the two little people, Jamie and Natali.  Of course, Kostas lit the fire and he and Kyriakos were grilling chicken and pork chops.  What else to do in such cold weather.  They started off with raki and then went on to wine.  Must say Kyriakos did stop the alcohol and go on to coca-cola because he was driving back down the winding road in the dark with two small children.  He looks after the children in the evening when Elli is working and is great with them.  He feeds them, takes them out, bathes them, 'milks' them and they are asleep when Elli returns at 9.  I know certain other males have done more but for a greek male he is a shining example.

Yiannis isn't too bad either in an emergency.  When Danae was ill not long ago he took the kids to school, cleaned the house, did the shopping and cooking and organised the homework. Not his usual activities.

Jamie, the little devil, is playing the Holy Child (not the Holy BABY) in the xmas pantomime at pre-school.  We are all still chuckling about that.  He is the youngest and probably the smallest in his class so the obvious candidate.  But can he keep still long enough?
nb - at the rehearsal yesterday apparently he was up and down like a bumblebee and as his finale he whacked the Virgin Mary.

He is a whizz with anything electronic - but what child isn't nowadays.  He brought a dvd with him in his little spiderman back pack and put it in our new player, which I still can't operate, and was watching Felix the Cat before I could get up out of my chair to help him.

Felix the cat, the wonderful wonderful cat
whenever he gets into a fix
he reaches into his bag of tricks.

Puke the cat
the terrible, terrible cat
whenever we can't take no more
She gets the boot, and out the door

Wasn't Felix around when I was his age?  He loves Felix and the mad professor. Today is his birthday.  He is 4 years old.  The clans will gather and lots shall be eaten and drunk as usual.
NB - he had a pirate party.  We all wore pirate hats and his cake had a pirate ship on it - cake made by Elli.  Roast pork, sausage pies, cheese pies, potato salad, fish sticks, egg sandwiches cut in the shape of dinosaurs, meatballs, popcorn - all unsalted.

How do you roll out pastry without a rolling pin?  With great difficulty.  You push the pastry out with your fingers and try and close the holes as they appear.  We had all the children here not long ago and George was wielding the rolling pin.  Someone told him to put it down before one of the others got it and clonked someone or something.  So where did he put it down?  Or did an 'older person' take it and hide it?  No-one knows.  Especially not me.  I have searched high and even higher- where else to search in a small house?  One day it will turn up - I'll let you know WHERE.
nb - ALL the kids are here again today for yet another bbq on our open fire.  This is not going to be a peaceful Sunday but Kostas is grinning from ear to ear and was hauling firewood at 10am and re-examining the menu in case we don't have enough to eat.  We always have money for food.

I made muffins and cinnamon rolls and bread yesterday - with a borrowed rolling pin.  What else does a woman do in weather like this- well, except sit down and read a book.

Kostas put the christmas tree up and even decorated it with our big red xmas balls.  Are they balls....or is there another word.  'Balls' is not a word that is socially acceptable anymore.  He has strung up lights on the lemon trees and made the summer umbrellas into xmas trees and has more in mind.  We also put down the last carpet as the tiled floors were getting a bit cold.

I looked up 'Xmas in New Zealand' on the net. Christmas down under is something completely different from what I remember.  I read about 'assorted breads with dips such as guacamole, dukkah!! and hummus.  NZ xmas carols, picinics and games at the beach, a hangi with the whanau (did that word exist when we went to school?), bbqing with exotic salads, cricket tests and Santa wearing jandals.

We were still having the traditional english xmas when I left with roast lamb and all the trimmings. Now you even have xmas in July.

New Zealand xmas carols seem to have taken over from the traditional english ones as well.  I did manage to hear 'kiwi jingle bells' on one site.  Georgeous.  Sung in a broad kiwi accent with real dinkkum kiwi lyrics.  Now I read you have 'The Southern Cross Looks Down', a 'Pukeko in a Ponga Tree', 'Sticky Beak the Kiwi' and 'The Jersey Cow came Mooing'.  I must see if I can download them from the net.

We brought back lots of xmas crackers from Australia this year.  At least those will be the original instead of homemade paper hats stuffed into decorated cardboard from loo rolls.  Of course Kostas is worrying at us about the xmas menu.  Shall we have turkey or pork or preferably turkey AND pork and a leg of lamb  cooked in the outdoor wood oven.  His wine has cleared thanks to the north wind and he is 'tasting' it with every meal'
nb - the latest is that he has also ordered a cows head for xmas and is going to slow roast it in the outside oven.

YES, it is official , the pavlova is KIWI.  I heard it on the news - on 3 NZ news over the net!   Some one in england (was it the oxford dictionary?) says they investigated the whole controversy and yes, the new zealanders made it first.  Australians say it is a conspiracy.  Just hope Elli makes one for xmas day.

Kostas cooked a rustic rooster with that long, fat, slippery, tubey macaroni for lunch and is now cooking 'keftethes' for Jamie's party - meatballs to the rest of the world.  It is his speciality - along with roast pork.
We are also cooking the three dozen frozen cheese pies.

Tomorrow I shall be looking for a recipe for yoghurt cake and something else to do with the quinces.  Our next door neighbour - Vasso's son is in charge of supplies at the Navy base.  He brought us 50 pots of yoghurt left over from the last lot of recruits.  There are another 200 if someone wants them.

I spent a day with Jan making more marmelade with the last of the grapefruit.  We did it a bit more carefully than my usual slap and dash methods.  13 pots of perfect marmelade.  Sorry, you're too far away to send them - although by courier they would probably be safe.  I once brought back a large jar of Edith's homemade tomato sauce in my handluggage.  Delish.  Not acceptable anymore either.  No liquids allowed in hand luggage.

Sunday morning after the birthday party.  The sun is shining and it is a beautiful but extremely chilly day.The wind is still blowing down straight from the russian steppes.

EX-king Konstantine has been sent a tax bill of 2.000 euros for the years 2004-6.  I hope he gets another one for for ten times the amount.   Lots of people are getting their taxes re-evaluated.  Poor Kyriakos got a bill for 500 euros.  That's not fair.  He has to work many, long hours to make that amount. Kostas is a 'civil servant' pensioner and so far he is safe.

The 'bifteki' have been slapped into shape.  The souvlaki on their sticks are marinating.  The chicken has been cut up.  Yiannis is bringing gallons of wine.  Elli is bringing extra bread.  The show will soon be on the road.

I moved the laptop into the lounge for a little more peace and quiet.  I am waiting for Nels to come and help me finish the xmas decorating.  I put a xmas cloth on the big table yesterday and 3 red candles in the middle.  Roll on New Year.  And more eating.  GROAN 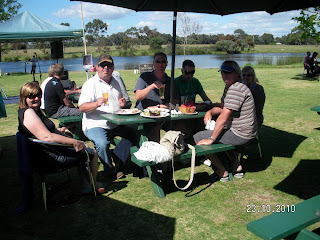 doing what he does best 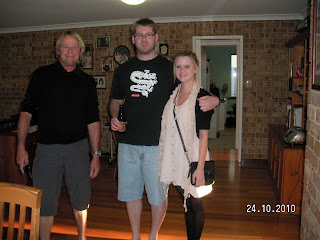 Tony (in jandals), Brad and Niki 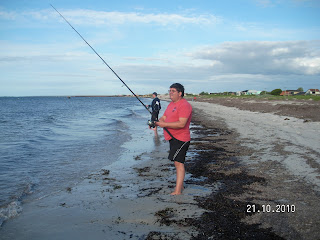