This morning the sun was shining so I went for a walk.

Elsewhere in the country there is heavy snow, villages are snowed under, main roads are chains only.

Schools in our area are closed for three days. It's not so tragic on the island. But Poros is  classed as part of greater Athens so we go under the same rules.

It is snowing 'properly' in central Athens. 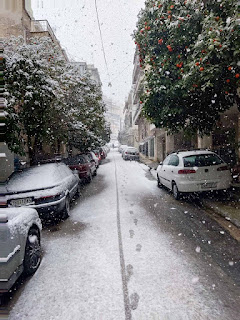 Pic from grandson in Athens
The parks have a few feet of snow
The motorways around the capital  have kilometres of cars unable to move  because of the thick snow. Many of the islands are covered as well. One of them is Naxos which I wrote about recently praising it's mild climate. Not so mild this winter.

I know you're laughing out loud Jenn.  Three snowflakes and life slides (skiis 🤣🤣) to a halt.

We lit our wood stove at 11, a pot of goat stew is simmering on the top. Yes, really, but I'm eating rice .  We sit and watch a marathon weather report from the rest of the country and await a fierce snow storm. Now I'm laughing out loud too. 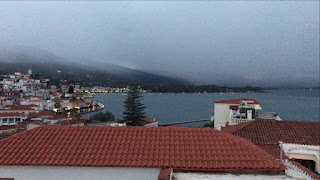 Snow clouds are coming down 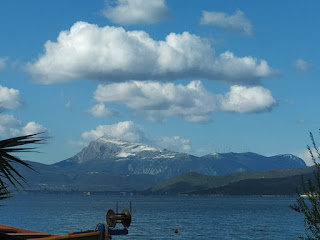 Yesterdays snow on the mountain
Since midday we have had snow flurries but it hasn't settled
Greek tennis player Tsitsipas won his next round, progressing in the Australian Open. The match wasn't shown on Greek TV but I got live updates from brother in Perth
That's it for Monday
Posted by local alien at 05:52:00