Ancient ruins are literally everywhere in Greece. Every step you take you are treading on the ruins of an  older civilization,  roman or greek.

We live within sight of the ruins of the 520 BC  temple to Poseidon, greek god of the sea, on the hill high above the sheltered harbor of Vagonia.  This whole area was a large port town straggling up the hill from the sea to the temple and it's sanctuaries.  All this is now hidden beneath the earth and the  ministry of archeology has forbidden modern building of any kind. 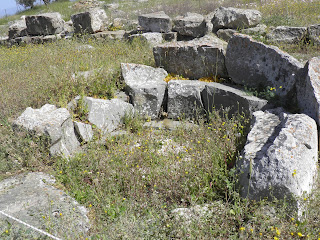 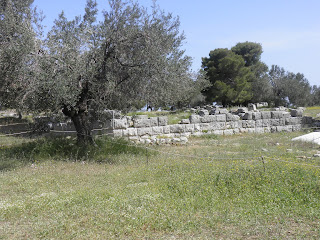 what remains of the Temple to Poseidon
It's the same story all over the country.  Those with land in this area can keep chickens and put a caravan on the ground, pick their olives but are not supposed to even dig a hole in the earth.

Stories of burying ancient remains while digging  foundations, of finding gold coins and relics while plowing are so common and they are so true.  If you want to farm your fields or build your house you keep quiet about any finds and hide the evidence quickly, preferably under tons of cement.

On Poros and in the immediate surrounding area  there are:

- the remains of Poseidon's temple, where we have had many a great picnic.  Small grandsons enjoyed playing with their trucks in the ancient earth.  There is a piano concert held here every August full moon.  A Swedish archeology group comes every summer and spends a few weeks digging here.  We have some of the soil that has been removed from the site in our garden.  Our neighbor has all sorts of marble columns and stones in her fields .

- the remnants of an ancient temple in the sea on the opposite coast.

- at  the town of Troizina, mostly farm land now,  you can visit the ruins of a healing centre and temples, all that is left of a large city.  All the local schools have trips here and my daughters have visited some of the sites which are hidden in farmers' orchards.

- the stone and 'house' of Theseus who supposedly killed the minotaur in Crete.  Legend says Theseus lifted the huge stone at age 18 and retrieved the sandals and sword left by his father.

- acropolis and volcano of Methana.

- another temple on the crossroads to Methana, still being slowly excavated.

and they are all less than half an hour away.  A little further down the road there  are 4000 year old bridges and roads, Tyrins,  the birthplace of Hercules and a palace thought to have been built by giants.  The incredible and still used 2500 year old Epidavros theatre, castles, more theatres, stadiums, acropolises and the palace of Mycenae, home of Agamemnon who led the expedition to Troy to bring back Helen (of Troy). 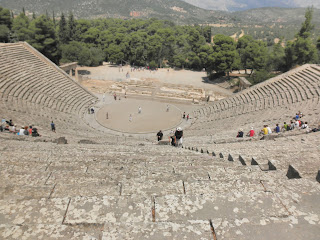 the magnificent theatre of Epidavros
340 BC and still used for summer performances of
classical greek plays.  Holds up to 13,000 spectators.
The stone seats at night are still hot from a day in the blazing
sun.  They are also very hard.  Bring your own cushion. 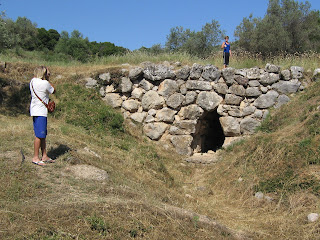 Greece, the home of Democracy -
it all began very UNdemocratically.  Less than 20% of the population were eligible to vote.  Excluded were women, foreigners and slaves.  Modern Greek women did not get the vote until 1952.  The dowry was not abolished until 1983 and it was the same year that The New Family Law finally gave women an equal say in family matters.
Posted by local alien at 10:37:00

Email ThisBlogThis!Share to TwitterShare to FacebookShare to Pinterest
Labels: antiquities