So much fuss and bother for one day.  And another three days for me to recover 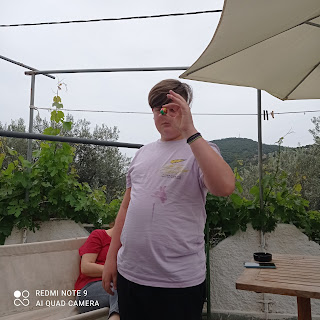 We had an easter egg, chocolate egg, hunt.  52 small, foil wrapped, eggs were strewn around the garden.  Fortunately they found them all.  The weather has turned hot.  It would have been 52 traps of melting chocolate. 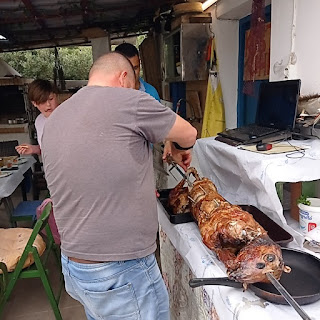 The photos are in the wrong order.  So here's the lamb just off the spit.  A perfection of fattiness 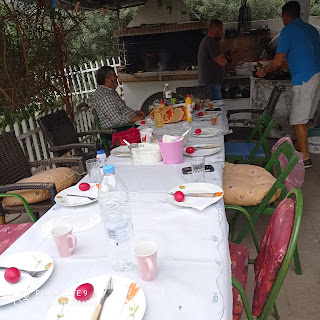 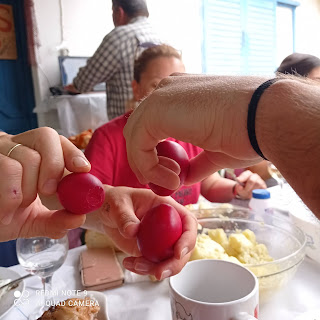 Cracking the easter eggs.  The broken ones are peeled and eaten 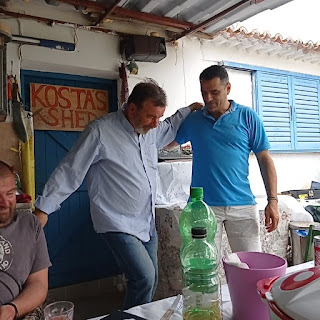 Once the eating and drinking has begun (early morning for some) then the dancing begins.  As my traditional person says, a starving bear won't dance. 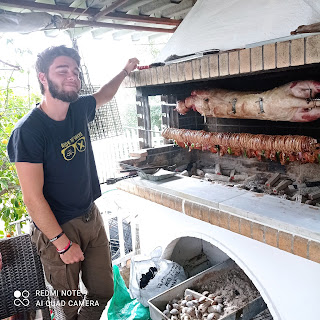 Tall grandson turned up for the dawn chorus this year.  Here he's looking after the three spits.  The easter lamb, the kondosouvli  (a roll of pork, tomatoes, onions and peppers), and the kokoretsi ( the roll of offal tied up with intestines). 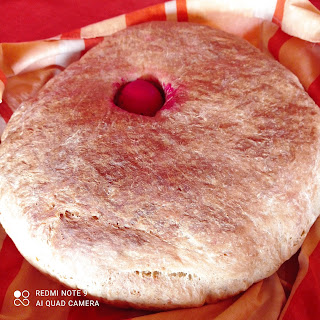 the easter loaf fresh out of the oven.
As usual a good time was had by all, especially the men.  My ears are still ringing from the endless loud (raucous) greek music. Everyone else (women and children)  retreated inside after the meal for icecream and brownies.  I snuck in for a quick lick of a bowl.  Then they all took off to the beach below to swim and enjoy a peaceful coffee and cigarette.  As I was the hostess, I stayed behind to referee.
So its done and dusted for yet another year.  Half the lamb was left.  How much can we eat?  Not as much as a greek man imagines.  There are bags of roast lamb in the freezer for many more (male) get-togethers.  I tried to press all the leftovers on the children but even they were overwhelmed.
Baking dishes, greasy plates and a load of dangerously sharp knives were all washed on the day.   Sons-in-law were tremendously helpful.  One scrubbed the baking trays, the other cut all the meat off the bone and they both hauled away the overflowing rubbish bags.
Till next Year (at someone else's house)
Posted by local alien at 09:27:00