Every time it rains we get an invasion of earth worms.  Huge worms.    They look like gentically modified earth worms.  They wiggle like mad and can escape from a paper towel or napkin with which I squish them with the swish of a tail.

Everytime it rains these huge monsters somehow struggle under the front door even though there is a draught excluder glued on to the bottom of it and try to flee across the tiles .  I open the door in the morning after a downpour and there are half a dozen curled up on the doorstep. 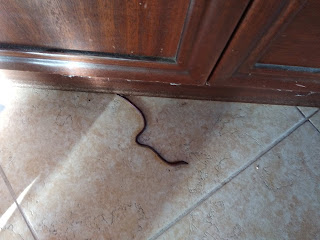 Not nice.  I don't want you inside my house crawling under the furniture 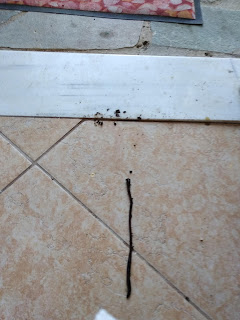 Making a beeline for the interior
I don't want you either.  Look at the dirt they leave behind
Yuck 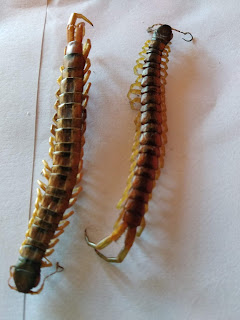 As for these things...
at least they weren't alive when I found them, in the autumn clean up.  Called forty-feeters in greek.  Believe me I didn't count their feet.  But I did hold on to them long enough to take a photo and show the grandchildren.  Look what Nana found where you were sleeping.  Naughty Nana