No, we're not Egypt or the Middle East.  I remember an advertisement for Egypt's Red Sea Riviera
'360 days of Sunshine every year'
I always wondered what the other 5 days were like.

Nope, that's not Greece.  Even I was surprised at the extremes of temperatures after my first winter here, way back in the 70's, before global warming.  I was not prepared for the cold and had to buy some warm clothes and a jacket

My m-in-law would crow now and again of Greece's wonderful climate, the best in the world, not that she knew much about the world outside her small yard.  I did not agree but didn't tell her so.  Summers are often scorching with temperatures in the 40's (celsius) and winters with freezing temperatures, -10 or more up north.  Around 5oC is normally the coldest we get here.

Greece has 23 ski resorts. The season is from December to March.

A greek winter is perfect  for hiking, exploring, roaming around ruins and eating at the few tavernas which remain open.  They'll be full of local greeks with more time to talk and you'll taste real greek food.  You could even pay for the privilege of picking olives, getting filthy dirty, freezing your extremities and having picnics amongst the goats and wild dogs.  Sucker.

If you're not adventurous then there'll be plenty of cafes open where you can still people watch, enjoy a hot chocolate, drink fiery local spirits and eat hearty goat soup.

In this area there are acres and acres of orange, mandarine and lemon trees.  Dark green leafy trees full of yellow and orange fruit.  The fields are full of wild greens just waiting for a housewife with a sharp knife and a plastic bag to fill.  Our garden has massive lettuces, spindly spinach and another similar green leafy vegetable called seskoula (lambs lettuce?).....and a flourishing crop of clover with bright yellow flowers.
I cooked spinach and cuttle fish yesterday.

The sun does shine.  Just not so much this winter

So this is a country of blue and white summer resorts, greek salads, octopus and ouzo in the summer and skiing down the slopes of Mount Olympus, home of the greek gods in the winter. 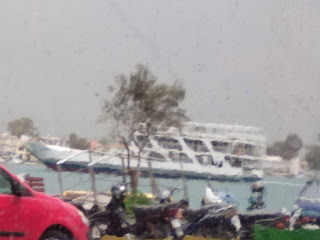 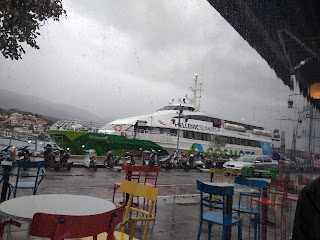 The Flying Cat (Catamaran) travels in quite heavy seas but often they too will be forbidden to sail, sometimes for a day or two 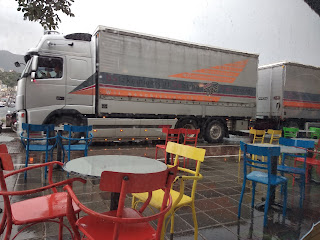 Road works at one end of the harbour means all heavy traffic has to go through the centre of town,  This harbour road is quite narrow, certainly not wide enough for two of these trucks to pass.  I wonder what happens when two meet midway.  I presume there is a mad rush to remove parked motorbikes and one truck drives up on the footpath, though even that is not possible at some of the narrowest points. 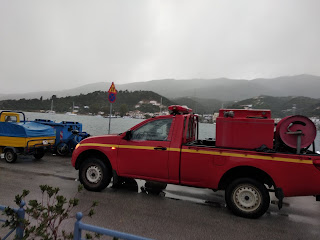 You can't really tell from this photo but the fire truck has lost the window on the drivers side and it covered in a piece of plastic. 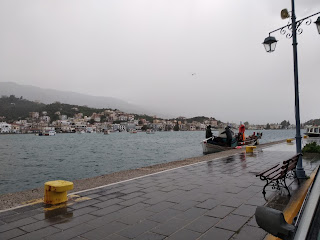