The prodigal son was the naughty son in the bible who took his early share of the family fortune and wasted  it all on wine, women and song.  Forced to return home when he was destitute he was warmly welcomed by his father who slaughtered the fatted calf for him.  And I'm sure his mother cooked his favourite baclava (sticky sweet), replaced his rags with a coat of many colours and sent him off to the bath house and the barber so she could show him off to the neighbours.  Or she would have if she was Greek. 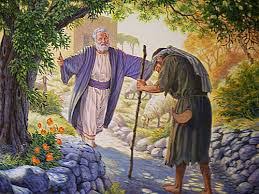 The return of the prodigal son

When he was younger my greek husband and his friends took great delight in celebrating this day, organising get-togethers where litres of wine were consumed, fatty pig and old boiled goat was eaten and enjoyed (?).    Any excuse for another naughty-boys-bash.

The younger generation is not so enamoured of this prodigal-son-day and this year he had only one of the old crowd for company.  He is now the grandfather of prodigal sons.

However, this 'festival'  falls during carnival so groups of party goers will always gather this weekend and every weekend till Lent just to celebrate, life and living.

They dress up, they dance, they eat and drink with passion..  Life is good when you're 'at home', ie on Poros, surrounded by friends and family. 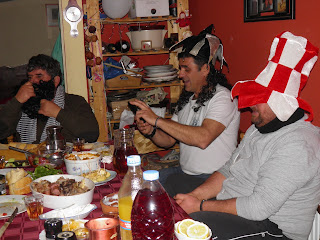 Prodigals in days gone by