Greece has been hit by three storms one after the other, Raphael, Sofia and now Telemahos (named after  Telemahos, the son of Odysseus who fought in the Trojan war).

We've had extremely early falls of snow over most of Greece but not in the Peloponnese which is the part of mainland Greece just over the straits of Poros.

Roads from here to Athens were cut off last night by heavy snowfall along the route and even the national roads have had long closures and of course back-up of traffic.

Many schools all over the country were closed today including all the schools on Poros.  Just as a precaution.  The day dawned with temperatures of about 1o C but no snow and only a sprinkle on the mountains opposite. The sun came out but it was 'sun with teeth'. 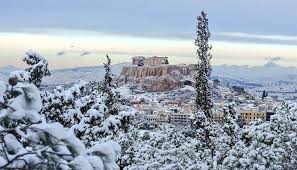 In Athens the Acropolis and the Parthenon on top were covered in a layer of white.  That doesn't happen very often. 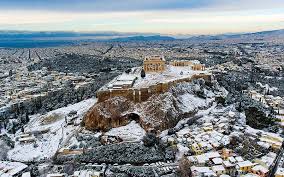 Another storm is blowing in tomorrow with heavy rain but with winds from the south so temperatures will rise a little.