O what a wonderful morning 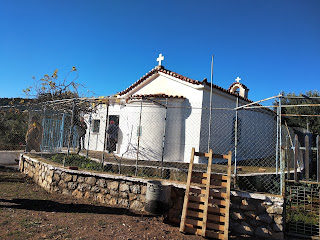 We arrived just in time for a lecture on the lives of Sts Antoni and Georgios and the final blessing of the breads.

The service started around 7am but worshippers come and go as they please.  So informal.  Only half an hour of standing so it wasn't too tiring.  I usually get sore feet standing still for longer an am hopping about on one foot trying to give the other a rest.

I have never heard of this Greek St George whose name day is on the same day as Antoni.  He's a recent saint, from the 1800's and of course went through terrible torture at the hands of the Turks but came out smelling of roses and with all limbs intact. 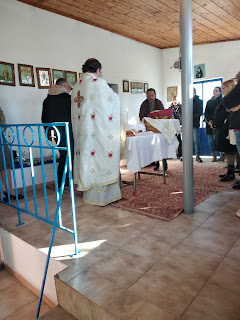 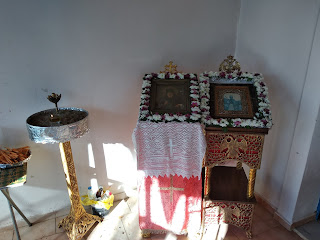 Icons of the two Saints and a container of sand for the candles on the left.  They had just been snuffed out at the end of the ceremony.  I enter, light a candle and find a place to stand as far back as possible.  The faithful light a candle or two, then cross themselves and kiss the icons 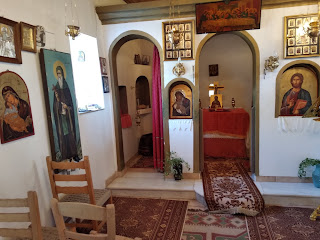 Inside the actual church.  There are about ten chairs in there.  The area at the front is I think called the Sanctuary in English.  Its where the priest goes about his business and women are strictly prohibited from entering at any time 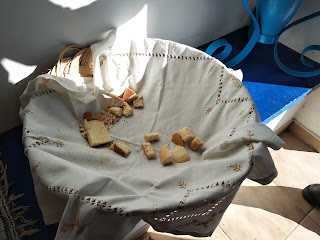 This is the last of the Holy bread.  Our priest was carrying the basket around offering it to everyone, but me.  A couple of times we came face to face and he turned around quite abruptly.  He knows I'm a foreign devil! 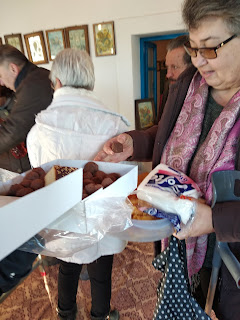 Her husband's name is Antoni so Kiki was handing out small sweet cakes she had made at home.  There were quite a few celebrating name days and we got a haul of sweet bread, sweets, chocolates and cakes.  This time I was ready and had a large handbag and two plastic bags to haul away the goodies.  They are pressed on you and there is no saying 'no'.  You either eat them then and there or balance them in one hand to carry  away for later. 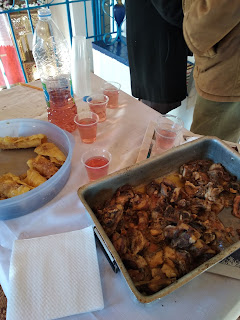 A councillor who lives next door brought a tray of roast lamb and a couple of bottles of his own wine,  The vineyards are within spitting distance of the church ftoo ftoo ftoo.  Excellent wine and he owns a butcher's shop so naturally that lamb was just falling off the bone and very tasty.  We/I drank about 3 glasses of that rosé, at ten oclock in the morning.  Lucky I didn't have far to drive my quad bike.  We just picked up pieces of meat in our hands and a paper napkin to wipe off the fat.  The best way to start the day. 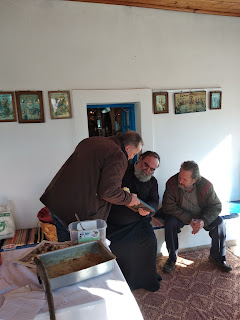 K and I were two of the last to leave, glued to that meat and wine.  The bones went to a neighbourhood dog and leftovers to the old man that looks after the church.  Yes, there were leftovers.

By this time they were telling stories of fiestas past.  Thirty years ago there were half a dozen 'Antonis' in the immediate area.  They started a bonfire at 6am and by the time the service was finished there were trays of lamb and pork hot and smoky.  Each had their own vineyard and made their own wine and brought more than enough to prove that theirs was the best in the area.

People came in hordes for these church fiestas, from Poros and all the villages across on the mainland, some hours away.  Friends and family gathered literally from far and wide, whatever the weather.  Rain or snow didn't stop anyone from enjoying themselves. 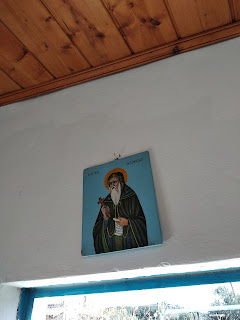 Brother Loukas from the monastery, it was announced from the pulpit, is rounding up numbers to travel to Athens on Sunday (after church?) to take part in the demonstration organised to protest the formalisation of the name of our neighbour to the north.  Previously called FYROM, Former Yugoslav Republic of Macedonia, it is now been officially confirmed by their parliament that they will be known as Northern Macedonia. The rest of the world has known them as Macedonia for years anyway. Who knows, who cares, except the greeks?  It's all to do with Alexander the Great.  Greeks say Alexander is Greek and woe betide anyone who disagrees.  Our neighbours claim Alexander as their own and now Albania says he's Albanian.  The Balkans are still boiling away, annoying one another and preparing for the next confrontagion.