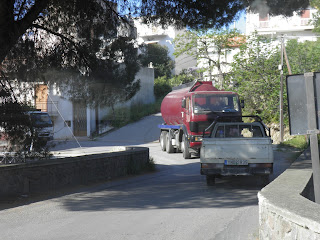 Stand-off on the bridge
The tanker, our sewage tanker, broke down just as it was about to cross the narrow bridge.  For a car to pass it needed about another metre of space.  What to do.  Everyone got out and pushed the tanker back a few metres.  I was surprised the tanker was so easy to move.  It must have been empty of its malodorous effluent 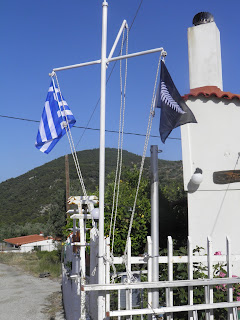 We have an official flag pole flying the blue and white greek flag and the black flag with the silver fern leaf which should be the official New Zealand flag. 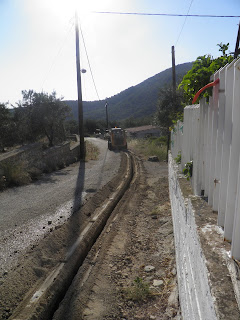 Residents on this road are getting their water metres moved to a spot just outside their gates.  At the moment the water metres are at the top of the road and there is always an argument with the municipality when a leak occurs between the metre and the house as to who pays the bill.  There are about 50 metres of pipe going down the road and our piping  has sprung a leak 3 times since we moved in.  The bill for the last leak was 400 euros.  A very angry K protested vehemently to everyone concerned (or not), saying the pipes down the roadside were not his concern.   Thankfully the council paid in the end.

This ditch was dug a week ago.  The road was measured for piping twice and today the piping arrived.  Maybe tomorrow they'll put the pipes into the ditch and cover it over . And then we will await the new metres and their installation. 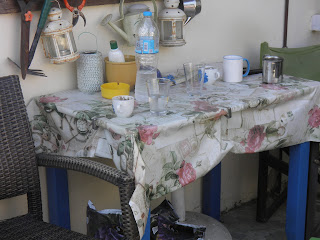 The workers supervising the digging of the trench, by a big yellow digger, were friends so they dropped in for coffee, a glass of water and chat about the numbers of fish not being caught this summer.

Next day.  They did return.  While the labourers dig holes the bosses sit and keep K company.  The conversation over coffee is once again fishing.  When these men are not fishing they are talking about fishing or watching fishing videos on Youtube 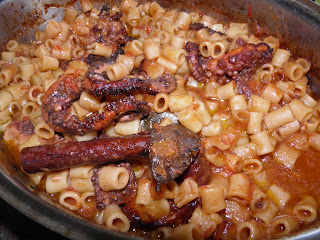 Short macaroni and octopus on the menu 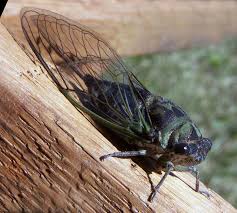 The cicadas started their summer song a few days ago.  There are still only a few of them.  It is not yet a deafening chorus from sun-up to sun-down 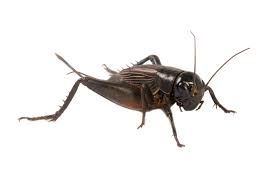 And this little chap has started chirping in the night.  It's a cricket, not a cockroach.