The Greek High Court has upheld the ban on e-cigarettes.  There will be no vaping, well not legally anyway, in public places and no advertising allowed.  They are to be treated the same as an ordinary cigarette.  Around here that doesn't mean much at all.  Most cafeterias and tavernas have large outdoor seating areas where everyone smokes to their hearts (or lungs) content.  On cold, wet days inside space will usually be covered by a fog of smoke.  If you don't like it you sit outside.  Vaping has become popular and smokers of e-cigs buy chocolate flavoured 'smokes' or tzatziki, strawberry, just about any flavour you can dream up.

The next things that could be banned are quad bikes.  They will be banned from all roads but allowed as recreational vehicles on sandy beaches and mountain tracks.  Quad bikes are called 'gourounes' here, female pigs in fact. No I don't know why. 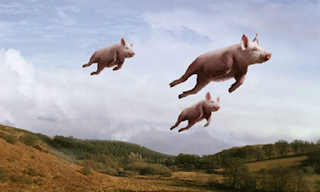 I don't know what I'll do without mine.  It will mean going back to driving a boiling hot car in the middle of summer and trying in vain to find a parking spot down in the town in the tourist season.

Quad bikes are popular all over the islands and quad bike hire to tourists brings in a lot of money.  Yesterday there was a protest 'march' of bikes in Athens against the ban.  Rental stores in the last few years have being adding to their ATV fleet and are in for a big loss if the ban takes place. 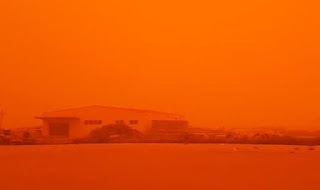 One of the thickest  dust clouds ever has covered most of southern greece.  The  orange dust cloud which came sweeping up from the Sahara desert was so thick that in Crete schools closed and the elderly were warned not to venture outside.  Here it was dull and 'foggy' and the sun hardly pierced the dust cloud.

Some years ago 'they' told us this dust was full of nutriments and good for plants and trees.  Now it seems the dust is full of heavy metals and we should stay inside or wear masks.

When it rains the dust settles and stays.  Cars and outside furniture have to be scrubbed clean.  A jet of water from the hose does not remove the orange sediment.

Basil
We planted our first basil plants of the summer today. 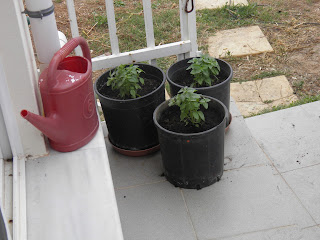 Parade
Some photos from the National Day celebrations 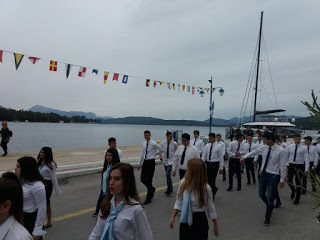 School children parade on the waterfront 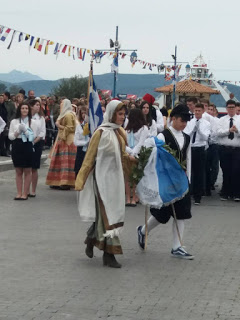 Grandaughter, in traditional local costume, lays wreath on behalf of the Secondary School 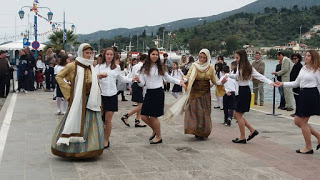