Church fiestas and the family

20th May St Lydia.
Granddaughter's name day.  And mine because she was given the Greek name that was closest to 'Linda'. Or I can celebrate on All Saints day in June  as there is no Saint Linda (well, except me)

21st May the fiesta of Sts Konstandinos and Eleni.

Saint Constandine was Emperor of Constantinople which was named after him (now Istanbul). Constandine was the first ruler to support Christianity.   His mother Helen  supposedly found the remains of the true cross - in 326AD.

Our local church is dedicated to these saints and is decked out in flags, flowers and it's prettiest doilies today.  Their icon will be paraded through the back streets of the Parish. Anyone who wants their household blessed  stands out in the road as the procession passes with their family icon and their incense burner and the Priest will stop for a few minutes, say the necessary words and wave the incense all about.

Today we have yet another of those endless family feasts for K and the rest of the celebrants.   Roast goat and potatoes is on the menu.  The goat was given to us before Easter and has been in the freezer awaiting this special day.  We will also have  Greek salad, tzatziki and feta cheese, salted sardines in oil and vinegar, my sourdough bread and quite a few litres of   wine from a local barrel.  E makes her famous (in our house) potato salad and D a big baking dish of galaktobouriko (milk and semolina pie in phyllo pastry and dripping with a sugary syrup) 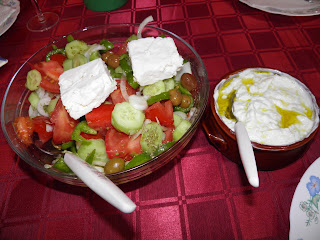 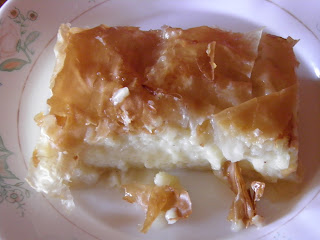 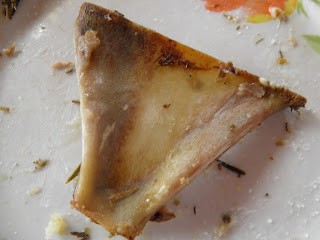 The shoulder bone from the lamb/goat which will tell you what will take place in the coming year.  This one seems to tell us of clear skies.  There is not much at all in it except maybe a stick figure which is sitting but probably dancing.  Not very conclusive, but then I have never been able to see much in any of these bones.

I have 'fed' the sourdough starter and kneaded a big loaf of bread which will be baked so it is hot when everyone arrives.  The potatoes have been cut into long chunks 'kythonata' the way K's wants them. The tzatziki is in the fridge so it's flavours blend.  Danae is bringing a few more kilos of Yianni's wine in case the twenty litres we have are not enough..God save us. 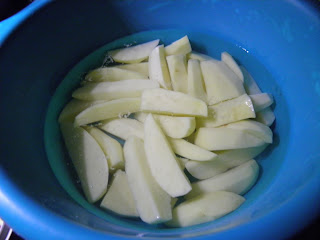 
You don't invite anyone to a name day.  Your friends and neighbours turn up, or not, as they see fit.  In years gone by we have had half of the island traipse through our doors.

In the 'olden days' K's friends would come for an hour or so drink a lot, eat a lot, loudly make merry, then climb on their motor bikes and stagger off to the next 'Kostas or Eleni', leaving behind a few bottles of ouzo or whisky as a present.  K collected enough whisky to last him all year.  No more my friends. A lot of people no longer celebrate name days except with their immediate family.  We expect only our immediate family today, maybe our neighbor Vasso and two close friends.  The present will probably be a plastic bottle of their own wine. We don't give presents in the family now either, except to the grandchildren and that is usually money so they can save up and get something they 'think' they need.

Anyone else will phone and wish K and Elli a 'Kronia Polla', literally 'Many Years'.  Our house phone and K's mobile ring all day and well into the night.

afternote - Vasso  brought two bottles of her own white wine.  K's nephew brought a bottle of whisky and so did another friend and another neighbor a bottle of K's favourite ouzo.  K also received a gardenia in a pot from the family.  An impressive haul for these days of frugalness and restraint.