A wedding and a memorial

Yesterday our girls went to a wedding at Methana 45 minutes down the road under an extinct volcano. The harbour smells sulphurous and the sea is a milky colour. There are baths there where those suffering from rheumatics can, with a doctor's certificate, have a therapeutic bath.

The bride is a neighbour and friend of ours.  Elli and Danae went to help her put on her wedding clothes and then dressed in all her finery she sailed from  Poros to Methana on a small boat, streamers flying, greek wedding music at full blast.  Our girls went by car and awaited her at the harbour with all the guests from Poros to escort her from the jetty to the small church on the harbour, another one of those small churches where most of the congregation mingle outside. 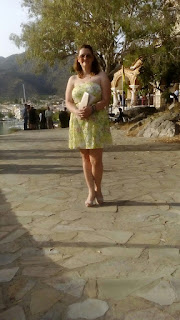 Elli dressed up in her best (with high heels on those cobble stones) outside the church on the waterfront. 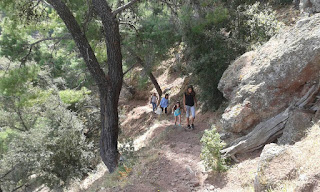 Trekking up the side of the volcano 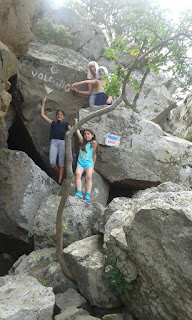 Grandchildren at the mouth of the volcano  after the recent trek up the mountain.  If you're agile you can clamber down over the rocks into the cave which is the crater of the volcano. There is no boiling mud or liquid lava, maybe a few bats and silence.  The last eruption took place in 230BC. 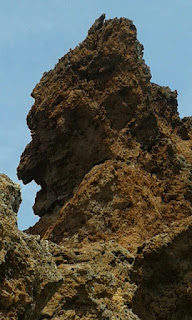 Guardian of the volcano.

This morning we had a 40 day memorial to attend.  40 days being the most important of the memorials. There is a simple service after nine days and then on the 40 days the service will be held at the one of the central churches usually after the Sunday service, as it was today.  This is when the soul of the deceased ascends to heaven and after this  the will can be opened as well.  In this case I think it was most likely to be  debt they inherited. 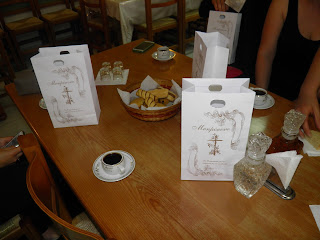 After the memorial we have coffee and hard biscuits and receive our bag of funeral wheat.  The coffee used to be without sugar, a death being a bitter pill to swallow.  Also the biscuits used to be hard rusks.  Now they are more likely to be sweet koulourakia (cookies).  Of course there is also the choice of brandy or mastiha liqueur.  I spilled mine this morning and took it as a sign to not drink anymore!  The white bag with the 'koliva' ('funeral wheat', also contains a plastic spoon, paper napkin and a very nice individual cake).  As you eat your koliva you say a prayer asking that the sins of the departed be forgiven. 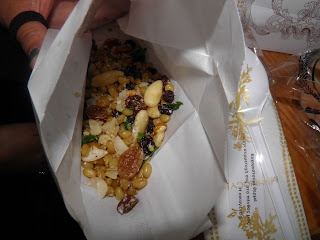 This is what the funeral wheat looks like. The wheat itself has to be boiled and then lain out to dry overnight on a sheet or tablecloth.  This is then mixed with chopped parsley, pomegranate seeds, almonds, raisins and the icing sugar. 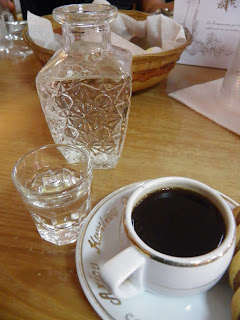 Liqueur and coffee.  After the coffee closest family and friends are usually invited to a meal (the wake, I guess).  Most often this will be a fish meal.  There is usually a gathering with food after the funeral as well and it is a time for the family to  remember the dead, laugh and cry and know that they must continue on with their own lives.

After the coffee everyone files past, presses hands and utters a few words of condolence

It costs a lot to bury someone nowadays and the economic situation is causing these traditions to be curtailed.  The coffee for the congregation is often held at a local café or taverna and can cost a small fortune if the departed was popular.  Our local church  fortunately has a recreation centre where the coffee can be served for a fraction of the cost of a taverna.  Funeral wheat for this crowd can also cost a few hundred euros even if you make it yourself with the extended family, as my sister in law did a few years ago.  I have taken part in three or four koliva 'gatherings' and have the recipe.  Elli is great with  the decoration. We help out when we can. 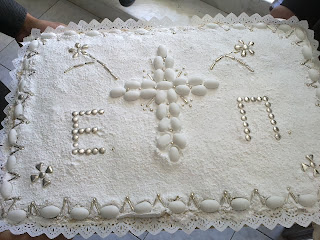 The wheat is poured into a large tray, the first handful being put down to form a cross.  It is covered in icing sugar which is smoothed down and then a cross in silver cashews is pressed into the top along with the initials of the person being remembered, a few arty  flowers and a border of  blanched almonds.  In the olden days we always used to have an old aunt to wail as well but the old aunts have themselves died out. 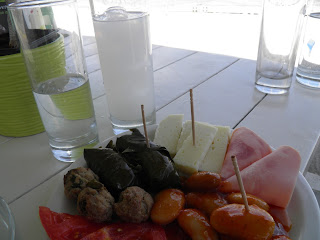 As there was no meal after this memorial K and I went down for a Sunday morning ouzo.  The glass on the left is the ouzo before water is added.  When water and ice are added it turns a milky colour.  Served with a small plate of giant beans, dolmathes (stuffed vine leaves), cheese and meatballs.  K was not impressed.  Ouzo should be served with octopus and cucumber, or at least some sort of fishy meze (snack). 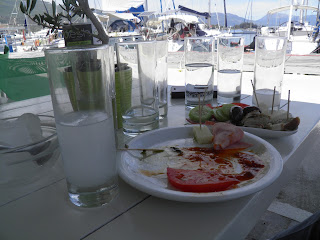 And the aftermath.  The café owner is a good friend of K's so he gave us another ouzo 'on the house' and another plate of meze. We shout out 'your health' across the tables when we get his attention. Two ouzos are too much for me.  I got home  and promptly went for an extended siesta.