Our lemon trees were branching out so much they covered all the front garden so we gave them  all a
severe pruning.  We have two trees, one next to the other, one has lemons with lots of juice, one has lemons with just a few hard squeezed drops.   Katherine, visiting from Perth one summer, offered to make us a lemon meringue pie.  She couldn't get enough juice out of a couple of dozen lemons and made peach pie instead.  Great thinking and a fantastic pie. 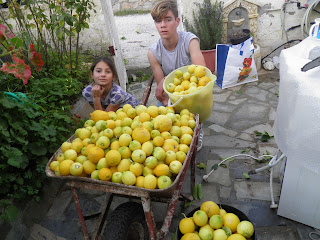 the lemon pickers, Lydia and George............
and the trees are still drooping with the rest of the crop


This year they do have a little more juice.  I made lemonade and squeezed enough to put in the freezer for some more lemonade in the summer.  But who wants to squeeze a ton of lemons.  Not even grandchildren who get paid for their effort.  You can freeze whole lemons just as they are, straight from the tree, but that means having a lot of spare room in your freezer.  Our freezer is already filled with strange cuts of meat and odd bits of fish which K keeps for bait.

Kyriako's mother, Nota, (synpethera - the mother of our son-in-law) is now a great-grandmother.  She wanted to celebrate the occasion but her brother died less than  a year ago so the family cannot observe the occasion with any sort of a party.  Guess what.  We had  the party at our place instead.  What 'party'.  When Nota and K get together the dinner becomes a feast.  But no music.
Kyriakos is a terrific cook.  In another world he would have been a chef and not captain of a water taxi.

Nota got hold of some wild pig which Kyriakos marinated and cooked.  Lots of red wine and a long time in a slow oven.  Meanwhile, K fired up our outside wood oven and prepared a 15 kilo cows head.  There's a lot of bone in that head, but there is also a hell of a lot of meat.  Tongue, brain, cheeks, eyes.   Both the pig and the beef just melted off the bone but there was so much meat.  Too much meat.  And lemon roasted potatoes and home made bread, hot from the breadmaker this time, not my sourdough.  Lettuce salad and greek salad and feta cheese and tzatziki. 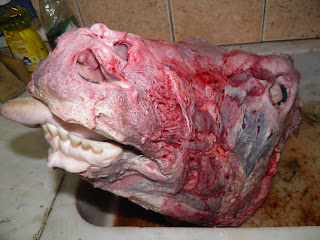 enough to make you a vegetarian! 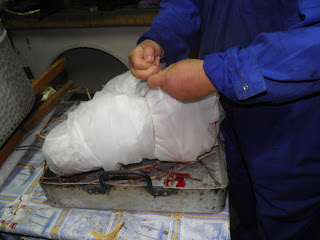 all packeted up and ready for the oven 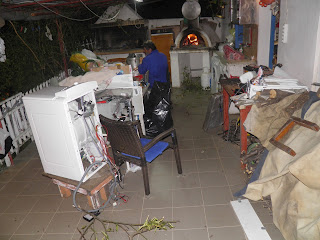 A week later we had the big meat eating day before Lent - smoky Thursday.  Your easter is a month before the Orthodox easter this year. Lent starts on 14th March, easter at the beginning of May.  Fortunately Elli and Kyriakos held the bbq at their place, downstairs in yard under the jasmine vine.  Lots of smoky mutton, pork chops and souvlaki and even more tzatziki.  An even bigger gathering.  All the Tzanos family, friends, relatives and neighbours.  'Poverty needs a little of the good life too'.  Greek proverb.  From the 14th March most members of the family will stop eating meat till easter Sunday.

Years ago the whole island would be covered in a smoky haze as little bbq's appeared out on the street and in every yard.  The petrol station used to have a huge grill and anyone turning up for a fill-up got a few glasses of wine and a lamb chop or two.  No grill this year. The taxi boat captains would have their own grill on the water front.  No grill there either this year. But the butchers shop next to the 'green chairs' (K approved cafeteria) had their grill out.  They also did a  roaring trade inside selling pork chops and chicken pieces.  I noticed that those around the grill seemed to be mostly Albanians drinking beer and scoffing free grub.

Memorial.  And the next 'bash' was the one year memorial of one of our elderly neighbours.  His family own the Paradise taverna up on the hill.  First of all though I had an hour standing up in church, trying not look at my watch.  It was All Souls Saturday so the service was at the small church in the graveyard.  After lighting the candle on the Tzanos family tomb and wafting around some incense, K stood outside gossiping with all the other men and I went in to pretend I was one of the faithful.  We came in at the end of the service but the new priest goes on and on and gives a little talk at the end.  Not to mention that he reads out ALL the names of the dead remembered at the church ALL through the year.  He spent over five minutes just reading out the names of all those souls.  Women came in and out with bowls of funeral wheat, small children cried and were given to grand parents who had got the few chairs provided. Finally I went outside but all the graves were already sat-on so I had to stand out there too.

Next we went for funeral coffee, the koliva (wheat) and a brandy or two.  I always come away from memorials a bit wobbly.

From there we were invited to the 'wake'.  This being a 'taverna family' it was a great repast.  A good time was had by all.  Lots of wine, loads of gossip but no music.   We had a selection of cheese, two different salads, bourekakia (fried rolls of ham and cheese in pastry), tzatziki and feta cheese dip,  and roast beef with potatoes and lemon rice.  No sticky cakes at a memorial meal.

In the good old days the (now) widow (K's distant cousin) would make 20 huge loaves of sourdough bread a week for the tavern.  On her knees she kneaded and punched, what must have been, about 40 kilos of dough then lit up the wood fire and baked them over the coals.  In later years the family bought her a machine which kneaded the bread.  Now the tavern only opens for Sunday lunch and  fiestas and the old lady still makes a couple of loaves of bread on special occasions.  I have some of her sourdough starter which has been going now for 3 years.  Strong stuff.

Sunday we had the two grandsons to stay over night and do some work in the garden.  We (they) finally emptied our big compost bin which has been going since we first moved in here about 8 years ago.  K's friend Menios (after Menelaos - the husband of Helen of Troy) who owns the other K approved cafeteria (the orange chairs) has been here digging and de-weeding our garden.  Under his instructions we are going to graft the grapefruit and bitter orange tree and have some summer citrus fruit.  Also he says he'll plant a summer garden for us.  He has suddenly become a gardening enthusiast, spends hours studying it all on the net but also puts it into practice .  K really does have some great friends.....and lots of cousins.

He shamed me into weeding my front garden as well, though my lettuces have grown quite nicely in amongst the wild sorrel.

Today is 8th March.  International Women's Day.  In the good old days I used to go out on the town with most of the Poriotisses (Poros women).  Even K's sister Dina could be  made to join in the celebration.  Large groups of women, young and some very old, would fill up the tavernas and then move on to the bars downtown and take them over for the night.  Dina would go home at this point.  The old biddies were always done up in their best furs and all their gold.  They were the first to get up and dance and end up on the tables doing a tsifiteli (erotic dance).  It was THEIR night.  Now they're dead and gone and their heirs have sold off the furs and jewelry.

Last night Elli, Danae and a couple of friends stayed in, ordered souvlaki, drank a beer and watched a movie.

PRADA.  I have a pair of Prada shoes.   Given to me by a relative with big feet and too much money.  Love them.  Though I am not a big fan of prada.  What a fun sentence to write!  This is the second pair I have been given.  The other shoes were sports shoes and they were ugly and uncomfortable.  I gave them to the animal bazaar.  These are terrific.  Just right for funerals and memorials. 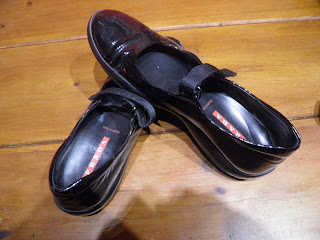 This weekend is the end of carnival and Monday the beginning of Lent.  It is a public holiday and a day of more food and drink.  Shellfish, octopus, kalamari, taramasalata.  No meat, dairy, eggs or fish.  But that is another story.