Hoarding foodstuffs in case of disaster is a waste of time.  I know.

The greeks went mad, the media fanned the flames.  We were not supposed to eat anything from the fields where radiation might have fallen.  Supermarket shelves emptied of canned goods and we saw on television news outrageous stories of families who had filled up rooms in their houses with tinned milk so their children would not be contaminated.

I remember it well.  It was spring and the first strawberries were out, selling at very low prices because no-one would buy them, except me.  It was back in the olde days when there were no frozen vegetables or imports and everything was sold when in season.  We saw strawberries for about a month and then they disappeared for another year.

I bought lots of wonderful fresh, cheap strawberries that spring - and my children grew up, had 'normal monster-like' children and hopefully will see their children have children.

I have just been reading a book about Ukraine and up popped Chernobyl.  This author says that when Chernobyl melted the winds were blowing north and thankfully most of the radiation spread to very low populated areas in the north of Russia.

I couldn't even afford to stockpile back in 1986  but by 2000 were in slightly better circumstances.  We were living on Poros by then, having moved from Piraeus to Crete, to Salamina and then 'home'.

Once again it was all the hype from the media that made me think maybe I should just put a few important things aside.  Toilet paper and big bottles of cheap shower gel.  Just in case you might ever be in this position, you can use shower gel to wash yourself, wash dishes and I have even put it into the washing machine in small doses when I've run out of soap powder before the next payday.  And you must have toilet paper, what else could replace that?  Don't waste money on the cheap stuff.  Been there, done that too, not a good memory.  Fortunately, for Elli and Danae I didn't stock pile dried beans and lentils.  We were already eating those once a week.  Any more and there would have been a revolution.  Teenage tantrums were already bad enough.

Little note.  We eat dried beans and lentils because they are a regular part of the greek diet.  Moussaka is not the national dish of Greece.  But 'fassolatha' is.  Fassolatha is a dried bean stew with lots of carrots, onions, celery and tomato (and olive oil).

As we all know the millenium bug was a non event.  I discovered
the loo paper and shower gel at the back of a cupboard when we gave our house to Elli and moved out up the mountain 7 years later.  Three huge bottles of cheap shower gel and loo paper covered in cobwebs which no-one wanted, not even me.  We had moved even further on..... into those false times of wild  spending when we thought we had finally joined the consumer society. So of course we were using designer toilet paper on our behinds by then.

And how long would 3 bags of loo paper  have lasted anyway with so many bottoms in the family.

Another non-event.  It did cross my mind that maybe I should buy a few extra kilos of beans.  K did that for me.  We have a truck that comes every week from Tripoli  (greek Tripoli) that has very tasty and quick boiling beans and he ALWAYS buys in bulk.  We still have about a kilo of those to go.

Angela Merkel and the media have put the fear of hellfire and brimstone into us these last few years.  If Greece goes bankrupt or has to go back to the drachma we will have standard of living of Bangladesh/Niger - third-world/poverty/hardship/distress -
Thesaurus.   You name it, if it sounds frightening it has been tossed at us.

And we were bombarded by this propaganda every time the deadline for the next bailout money came up, every election, every big decision.  Put those greeks in line.  Scare them into submission.

But we heard it too often, nothing ever happened, we always got the bailout.  It was like the small boy yelling 'wolf'.  We don't watch the news anymore and all is well with the world.  Everything we need to know comes in official envelopes.  Tax bills, pension cuts, 'special' payments.  We're the lucky ones.  We still enough money to pay the bills and buy a few litres of wine.

And poverty???  We'll always have enough broad beans to eat and Vasso has just brought us half a dozen lettuces, a few kilos of spinach and some beetroot.  She must be cleaning out her winter vegetable garden.

Did you know that you can blanch and freeze lettuce?  No good for salads but it makes a great fricase or stuffed lettuce leaves.  And beetroot. We've had a few too many of them too.  I have just filled up two big jars of pickled beetroot.  Maybe the kids will take the rest.

Pension cuts still being made, the Troika still threatening more.  It is always interesting to see what they have left us, month after month.

I have just had some scary info on our economic situation  and I just might ignore my own wisdom and start a new stock pile.

More news on the next instalment .

And now for some rather old photos. 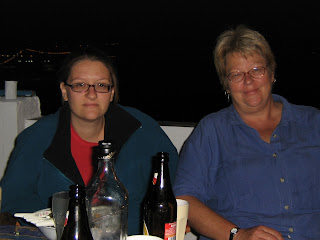 Elli and me - a few years ago 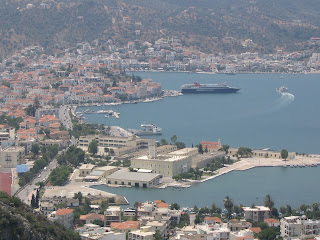 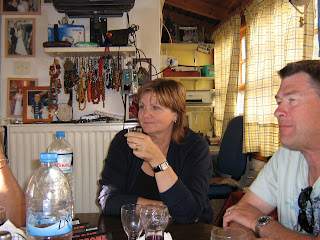 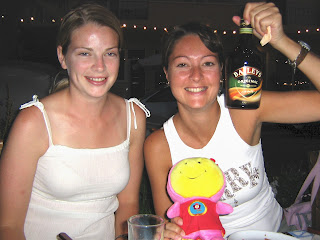 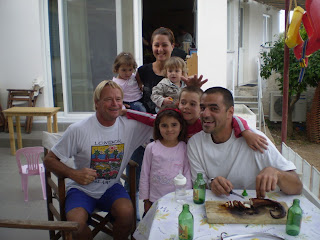 Poros - Tony, Danae with Lydia and Jamie
front Nels and George with Yiannis 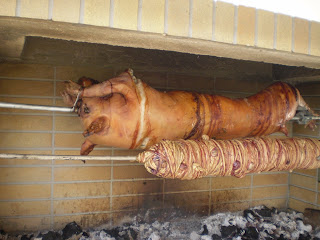 The good old days - always pig on the table -
or the spit -
this was for K's birthday one year
when Tony and Rainy were visiting -
the pig was so well cooked the meat literally
fell off into the ashes when we were taking it down
but we still ate it all!