We are suffering through a killer heatwave.  Not since 1987 have temperatures been so high and for such a long period.  Back in 1987 very few had aircondition and over 1,300 people died. 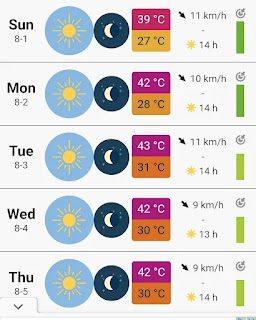 Such high temepratures are, apparently, rare for Greece and happen about every 15 years.  The heat today is worse than I can remember.  It's a real inferno out there.
We will be having temps in the 40s for at least another week and this on an island surrounded by water.  We are normally quite a few degrees cooler than say the nearby cities of Athens and Nafplio.
We went shopping very early in the morning, got essentials and then retreated back up the mountain.   There is a breeze out there but it's a searing hot wind.
11am we retreated into our inner sanctum and turned on the airconditioning. Cross your fingers there are no power cuts because of overuse on the power grid.
We'll go swimming around 5 and stay there till it's dark.
Last night was hot but not unbearably so.  Nightime temperatures are also getting higher so we are not expecting to be any cooler tonight.  K tried sleeping outside and he said it was quite comfortable and he needed a sheet.  I prefer to be inside away from stray cats, mosquitoes, flying insects and howling dogs, with a fan to keep me cool.
Fire risk is very high especially with the winds and I am very aware of any odd cloud on the horizon or anything that may smell vaguely like smoke.
Meanwhile Greece has just won it's first gold, mens rowing, single scull.  Some much needed excitement in these harrowed times.  I've just heard the Greek National Anthem for the umpteenth time.
Zito Hellas.  Well done Greece
Posted by local alien at 07:11:00