Pics from the past. Just a few of the many ancient sites in our immediate area. 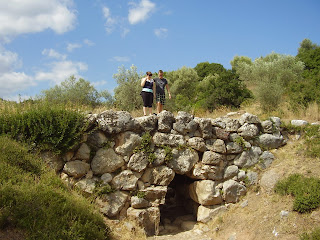 Stone bridge still standing from 4,000 years ago. This is my favourite ruin. There are several bridges in the area and remnants of an ancient road, once used by travellers and chariots 'they' say.  I enjoy taking any visitors to stand on this bridge. Traditional person is no longer amused. He's 'been there, done that' too often. 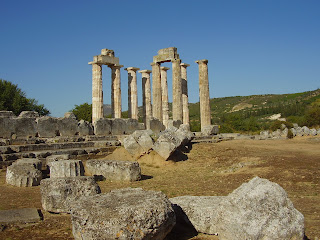 Ancient temple at Nemea.  In wine country an hour or so from us.  Also the site of a small friendly and very traditional taverna along an old river bed.
Traditional Greek persons tolerate the ruins because of their proximity to the traditional taverna. 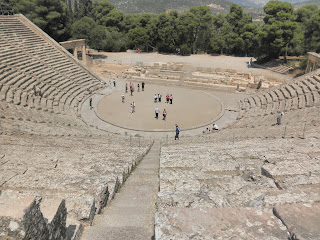 Epidavros theatre
Now open again as are all ancient sites
No doubt getting ready for the summer festival of ancient Greek drama.
My very own traditional person complained last time he visited the theatre and told the guards he had brought so many people to view the site that he should not have to pay. They let him in free. 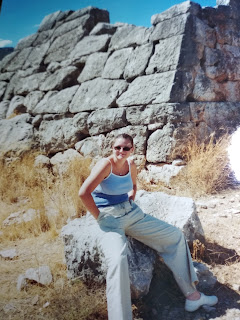 My daughter, seated on an ancient stone from the Greek pyramid behind her. Also an ancient site on the 'ok' list because of the excellent grilled lamb chops at a taverna close by.
The pyramid is possibly  from 2,500 BC.

The temple to Aphaia on the next door island of Aegina
Impressive ruins. Aphaia was a goddess associated with fertility and agriculture. She was worshipped almost exclusively on this island. Stones from one of  three vaulted tombs from around 1,600BC.  Located on the mainland just a few minutes away.
I visited these about 20 years ago with a friend and we had to jump a gate and walk up through someone's olive groves.  These stones were all that we could see back then but they were being excavated.  One of the tombs, it says, was the height of a three storey building.
As you can see they are in an impressive location on a rise overlooking the sea.  Hope I can visit them again. 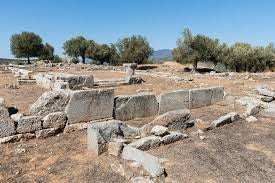 Nearby are the remains of  the ancient city of Troizina.  I have visited these ruins many times in days of yore.  We have had picnics with the kids and wandered and wondered.  The ruins are hard to find, in far flung fields surrounded by herds of goats.  Once it was a city of over 20,000 and much of the remains are in the olive groves and amongst the orange and lemon trees belonging to farmers from the modern day village of Troizina.

Email ThisBlogThis!Share to TwitterShare to FacebookShare to Pinterest
Labels: antiquities