Two milestones this week
Our first journey over the seas to the distant lands of the mythical Peloponese. In reality, a 5 minute car ferry ride to the mainland.
Also I finally had my hair cut.
The new hairstyle is nothing special.  I had a very fast snip of three months of long, oddly curling hair, down in my sister-in-law's yard.    The grey showing at the sides hasn't disappeared altogether but there is an overall camouflage of blonde, from a bottle.  I am happy.
My hairdresser, a cousin of course, came with her scissors.  My sister-in-law made some cups of greek coffee, we all caught up on the gossip, found out for whom the church bells had tolled  that morning, and went on our way.  We have a rendezvous in 6 weeks time, same place, same people, not so much hair to cut though.  It was deja vu for my sis in law and I.  We remembered years ago when half a dozen neighbourhood women got together in her yard for their haircuts.  Now that was the place to hear gossip.  But it wasn't only gossip.   There was always lots of laughter because one of them was sure to give us an up-close and very personal story.  Those housewives used to let it all out in more ways than one.
The next day we were on our way to the hospital at Korinth, for a rendezvous.  Not an emergency but a necessity.  Who wants to go to a hospital these days. 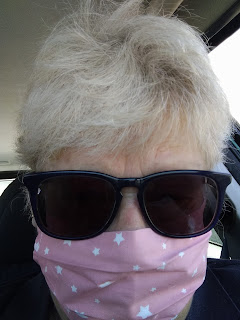 We had to take the car across on the ferry and weirdly everyone, even those closed in their cars, had to wear a mask.
This is me hiding away under my mask and dark glasses
I left K at the hospital for his appointment.  No-one but those with appointments which show up on the digital list are allowed inside.  Greeks are often accompanied by a few relatives for support so some weren't too happy about that.
I went off to do some shopping at a big shop nearby.  It's a popular greek chain with toys, clothes and household goods.  I was surprised there because no one was wearing a mask, not even the workers.  There were regular announcements  about keeping your distance  but otherwise it could have been pre-corona virus.  I just wandered up and down the aisles and tried to keep out of everyone else's way.  Fortunately at that early hour and on a week day it wasn't crowded.
K was in and out and I picked him up sooner than expected and we took off for home.
It isn't safe out there in that big wide world
Since June 15th when the borders opened to overseas flights there have been 9,400 incoming passengers and 21 tested positive.  Another 5 cases were detected at the crossing from Bulgaria.  All have been quarantined.
I wonder if they are watching the other passengers on those flights.
Posted by local alien at 11:05:00