26th October
Feast Day of St Dimitris
Patron Saint of the northern city of Thessaloniki, capital of the district of Macedonia, Greek Macedonia

Name day of Dimitris, Dimitra and Danae
We have quite a few members of the family who celebrate name days on the 26th.  Younger family members.  They no longer continue the old tradition of open house and revelling long into the night.  The tradition was changing anyway but the economic crisis hit these festivities on the head.  Nowaday our kids have a few drinks with close friends.

In days gone by we had half of the island traipsing through the house on K's name day and the party went on till the last guest staggered home or the police arrived.

Just to make a small diversion
While I was looking at Thesaurus.com to avoid using the word 'tradition' for the umpteenth time I came across the 'word of the day
-       horripilation      -
WTF   I learnt a new word today
it means
a bristling of the hair on the skin from cold or fear
Very descriptive

And now on to the flags

28th October
Greek National Day
On this day in 1940  Greek Prime Minister gave a resounding NO to Mussolini's demand that Greece allow the Italian army to occupy the country.  The Italians immediately  invaded over the Albanian border but were driven back by a fierce resistance

Today there will be parades, speeches, wreath laying all over the country and anywhere in the world where Greeks have settled.
Heroic films are shown on most tv channels, school children on Friday had a half day to recite poems, sing songs commemorating the heroes and we put up our flag outside the house 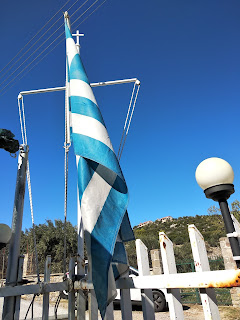 Flying the flag at our house 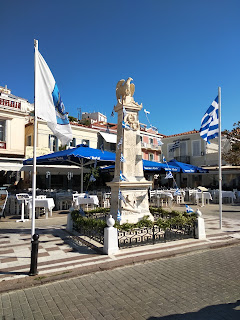 The cenotaph is ready, decked out with  blue and white greek flags 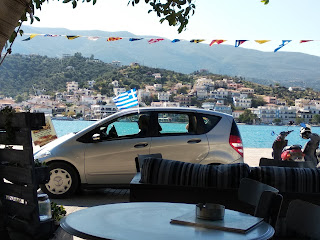 You'll see the flag everywhere there is a patriotic greek 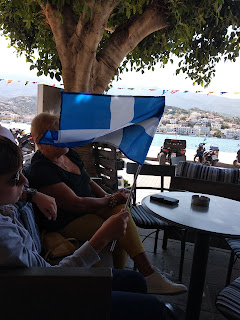 At the table next to us in the cafe
This is the naval flag of greece, a white cross on a blue background 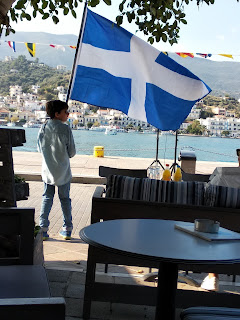