Up on the Roof Top

We only have cinema in the summer and the big screen is on a roof top under the stars.

The first showing is around 9 and the second just after 11pm, depending on the length of the film.  The movies are the latest ones out this year for the adults and for the younger generation there are kids movies, usually on  a Friday and Saturday evening.  And the tickets are only about 6 euros, or was it 8, very cheap anyway. 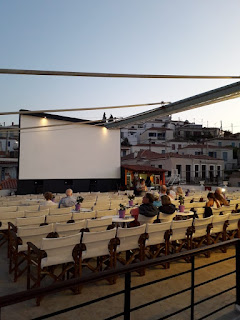 I haven't been up there in years.  My daughter reckons the last film I saw with her was 'George of the Jungle' with a cute Brendan Fraser, then in his youth.  That was way back in 1997.  I remember seeing 'Coyote Ugly' .  That came out in 2000 and that was a long time again.  If it hadn't been for our visitors it probably would have been another 20 years before I made it up to the roof top for some al fresco entertainment.

The only film that fitted in with everyone's schedule was 'Once Upon a Time in Hollywood' directed by the quirky Tarantino.
I loved it but others described the film as a waste of three hours.  It's a take-off of all those hollywood movies of the 70's with the music to go with it.

Who remembers 'I fought the law' by the Bobby Fuller Four?  Hippies, loads of unnecessary violence that's simply over-the-top Hollywood hype, fags in every mouth, a hilarious Bruce Lee send-off and the Manson family, with a twist.  Leonardo Dicaprio and Brad Pitt just add to the scenery.
You have to be from a certain generation (baby boomers?) to appreciate it all and I sure did.

Thanks Paul and Karen for the idea and Danae for making sure I made it to the top. 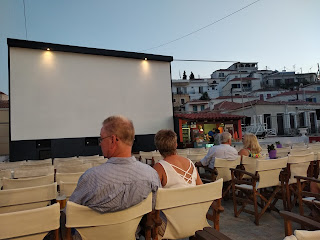 The large outdoor screen
I saw our local priest, whose home is behind the building, hanging out the washing on his balcony before the last film....... almost 20 years ago 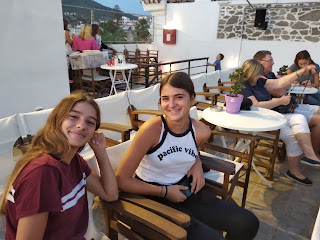 I was entertained and left happy