It rained yesterday, a good downpour. This morning  the earth is still damp. On my ride on the quad bike down to town the air is
full of the sharp, pungent tang of pine needles.  It smells healthy enough to encourage great gulps of fresh air. 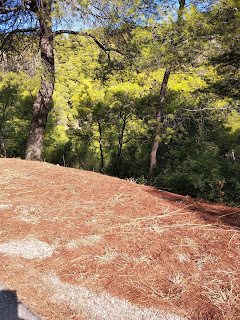 The pine forest is green but the rest of the landscape is still dry and brown. Underneath the pine trees is a thick pile of dried, brown pine needles. No sign of the wild flowers which will brighten the road in a month or so, if we have more rain. 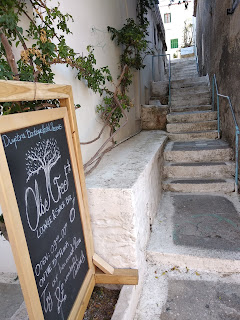 If you climb up these narrow steps and then clamber up 3 flights of steps at the Dimitra Hotel there is a coffee bar with a marvellous view of the harbour and mainland opposite.  The hotel is just below our old house and I enjoyed this view for many summers.  We can see their roof terrace from our roof terrace. 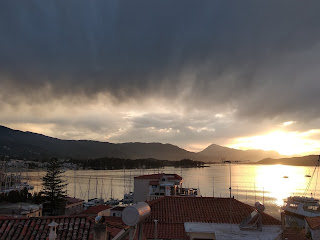 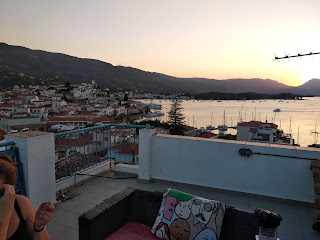 Our views are even more spectacular 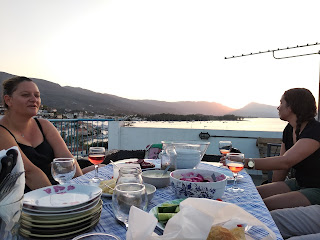 Number one spot for our visitor's
first evening.  Only it's not 'ours' anymore.  Our daughter Elli, on the left, has taken over hostess duties

I passed the sign for the hotel as I was on my way to the doctor's office.  Just a routine prescription visit.  Unfortunately he had been called out on an emergency and we had an hours wait till he returned. 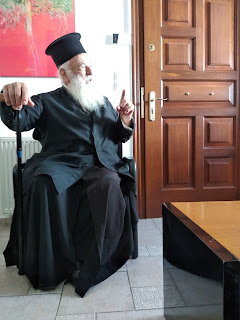 Usually the doctors office is where we learn all the latest gossip.  Today Papa Panarytos took over the conversation and gave us his light hearted view of life.  He knows a bit about life, having been a policeman before becoming an island priest.  He couldn't remember who I was even though I told him I was the wife of K, officer in the Navy, son of Georgios the builder who helped build the monastery.
I was about to roll out the family history when I was called in. 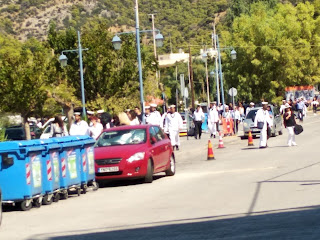 Outside hundreds of new recruits had just been sworn in for their military conscription and had been let out of the navy base to begin their few days of leave before joining their ships or units.  There were mothers and fathers, sisters, grandmothers and girlfriends all doting over their 'little' boy who had been away for just 2 weeks of basic training.  All greek men used to serve 2 years in the armed forces.  They still must serve in the army, navy or airforce but their time is now down to around 9 months.