My mother in law always made fava (split pea puree) when she baked her weekly loaves of bread.   My traditional greek loves fava, cooked simply, the way his mother did.  As soon as her trays of bread were carried off to the local baker she put on a large pot of water to boil the split peas.

The night before she sat and cleaned the fava, sitting out in the yard on her little stool, apron over her lap.  She would spill the peas into her apron and pick them over removing any sticks or stones or any odd coloured beans that were in the bag.  She bought them by the kilo from a small shop up the road where they were on display in a large sack.  Nowadays we mainly buy them in a small plastic bag from the supermarket and there are no sticks or stones left by the factory which packages them.  However, there are still a couple of places around town which sell them from the sack.  The word soon gets around as to whether they are fresh and boil easily and the sack empties quickly...or not.

My mother in law's fava was always scooped up with chunks of fresh bread still warm from the baker's oven.  Otherwise she cooked fava during the summer when there was fresh fish or octopus.  We also eat it mainly in the summer and if we have no greens then maybe I will make some fava to go with fish  K prefers greens with his fish or the large overgrown zucchini called pitsounia. 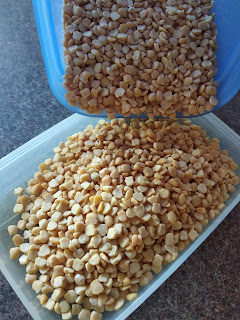 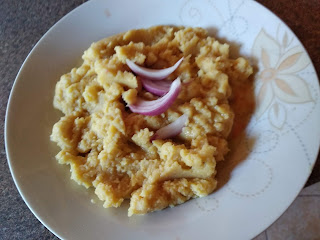 Pease pudding.  Dahl without the spices

Wash the split peas well in lots of water then put them
into boiling water and simmer till soft and mushy.  I always add an onion cut into four, nothing else.  The scum is skimmed as it starts to boil and then it is left to bubble away.

Leave it for about half an hour.  You can easily tell if the peas have softened.  They look mushy.  Add a teaspoon of salt at the end.  Then comes the tricky part.  You have to make sure there is just enough liquid in the pot so when you puree the peas they are not too runny and not too dry.  This does thicken as it cools.

Then I use a stick blender to puree all the peas.  Some people like it very smooth, others like it a little chunky.  Taste for salt when you've finished the puree and add to taste.

To serve, spoon it into a large plate and add far more oil than you can imagine it needs.  My traditional person always adds more oil even if I think I've added far too much.  Stir really well till it is smooth and creamy.  Olive oil, of course.  Sprinkle with chopped onions and have another plate of sliced onions on the side.

We eat fava as a main meal but at a taverna  small plates are served as starters.