The Streets are Decked

Poros is in Christmas mode.  All the harbour streets have xmas lights, the houses are lit up with, often wonky, flashing lights and festive trees in their windows.  The same darn wonky lights that annoyed me last year have been put up around the windows of the same house.  I want to get up there on a ladder and push them into place.  They dip and waver and the last bit climbs up the wall on a strange angle, obviously to reach some power point.  FIX THEM damn it. 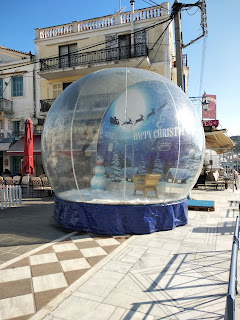 The main square has this strange snow globe with an empty chair in it.  Will Santa sit there?
The kids climb in there and throw fake snow at each other.
The fake snow is made up of tiny particles of re-cycled plastic bags.

There is also a minature train in the middle of the square but it was still being assembled so I didn't take a photo.  The train offers free rides round the square to all the children in the evenings. 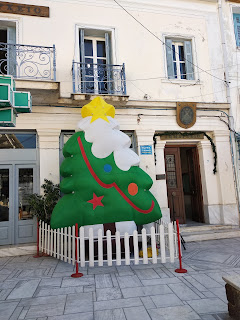 A huge blow-up Christmas tree outside the Town Hall 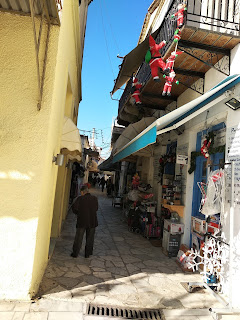 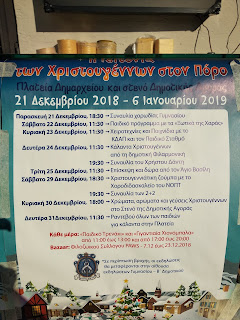 A list of festive activities which of course you can't read because it is in Greek.

A popular singer is coming to give a concert in the square.  There will be a Santa bringing presents and tonight the High School choir gave a concert of carols, greek and otherwise.  My grandchildren were singing 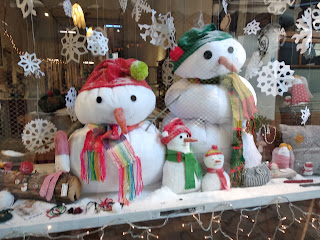 The Crafty shop window in the back alley 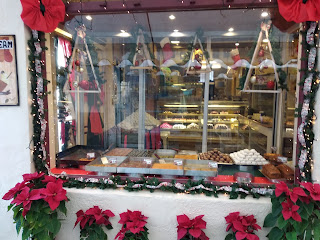