It Came, It Went

Hristouyenna, Christmas
an annual religious and cultural celebration which takes place on December 25th, unless you're a follower of the old calendar.   They'll be celebrating on January 8th


Christmas Day is a holiday here and so is the day after.  It is also the name day for those named Christos, Christina or variations thereof.

In days gone by it was simply a day off work.  All the family ate together and then ours would walk up the steps with a box of cakes to celebrate the rest of the day with cousin Christina and later at the house next door with cousin Christos.  Presents were only given by St Nik to our own 'foreign' offspring.

Nowadays it is a time to eat too much,  to spend money and for families to get together whether they like it or not, usually for the sake of small children, just like the rest of the western world

Our day was 'fraught'.  Small underlying tensions remained 'mostly' underlying but everything else that could go wrong, did.

The weather was warm and dry at 7am says my daughter.  I wouldn't know.  By 9 it was pouring with rain and it rained all day

Half of the presents I ordered are mid-Pacific, still haven't turned up.  Looks like I'll be keeping them for summer name days, when they arrive. 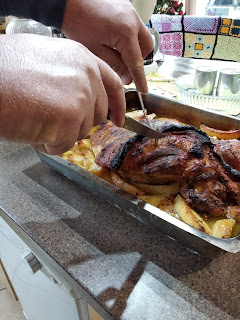 There were various pieces of meat.  The roast pork was delicious and the crackling crisp and fatty 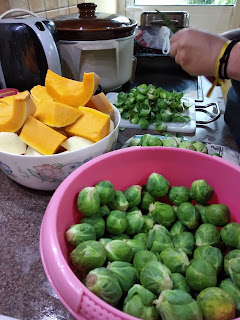 The brussels sprouts were enjoyed by brussel sprout enthusiasts
Half were boiled and half were roasted
There were roast spuds, sweet potato (kumara) and squash 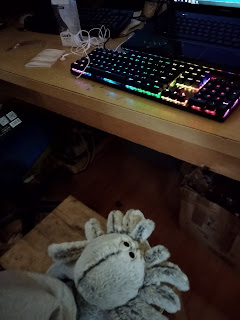 A pair of tarantula slippers and a neon flashing keyboard 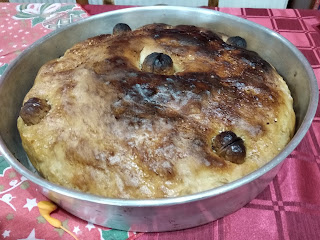 The Christopsomo (Christ Bread) was a little tinged but just as fresh baked bread should be.  Most food including the bread was baked in the outside wood fired oven

The chicken was cooked in our electric oven along with a nasty smell of burning plastic.  About half way through cooking I discovered the smell was coming from the plastic handle of a bread knife which had been left inside the oven. It had melted all over the bottom of the stove and had to be cleaned up quickly before the chicken started tasting of burnt plastic as well 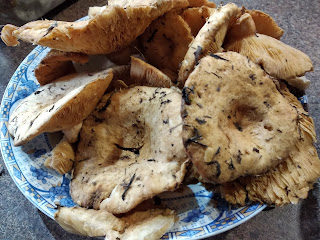 Fresh mushrooms gathered locally and kindly given to us by a friend.  Unfortunately they were extremely bitter and went on the compost heap instead 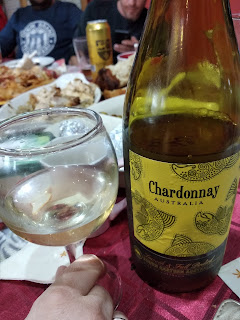 Australian chardonnay helped save the day
And shots of Baileys

The banoffee pie was a disaster.  The base didn't set, the caramel burnt and left a smoky taste and the cream wouldn't whip.  The bananas were perfect.  No one ate any, not even the bananas 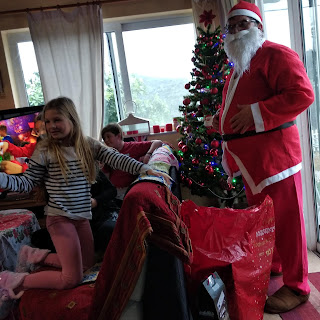 St Nik arrived on time and spread some cheer