In the Saronic Gulf , just out of Athens you'll discover the cosmopolitan island of Aegina, one hour away by hydrofoil, the tiny island of Agystri, a typical greek island in a nutshell, the spa of Methana smelling slightly sulpherous under the volcano and the Island of Poros, jewel of the Aegean.

Our favourite dining places in Poros, where else,  are right on the water.   This is Sotiri's Taverna where we bring all our visitors for the obligatory sunset and real greek cuisine 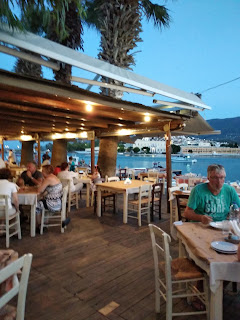 We arrive early as the sun is setting along with the tourists.  By 10 the tourists have left and the serious Greek eaters begin to drift in.

Kids run around the tables. Dogs are attached at one end to table legs or owners hands.  The inevitable taverna cat prowls the floor boards seeking discards and handouts. 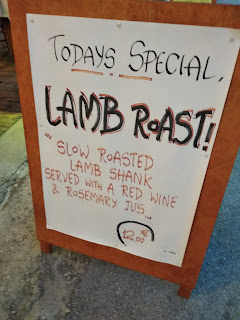 Food for foreigners.  Red wine and rosemary 'jus' makes its debut this season 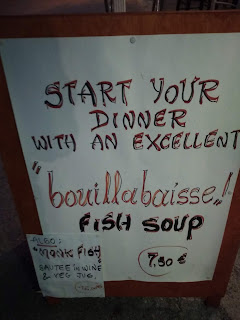 Bouillabaisse
Greek fish soup?  No.  My traditional person was eager to sample this, one of his favourite meals.  Unfortunately there wasn't much traditional about the bouillabaisse, neither French nor Greek I imagine.

Greek fish soup is, traditionally, served with a plate of carrots, potatoes and zucchinis which have been boiled in the 'jus' and a chunky piece of the fish as well with lots of lemon juice and olive oil.  Some of the vegetables had been pureed into the soup to make it thicker and there were no vegetables or fish served on a side plate with that essential lemon and oil dressing.  Nothing.  Just the plate of soup.  A complaint was put into top management of course and as we are the best of customers we were not charged but they lost a star and a 'K star', far superior to that Michellan medal 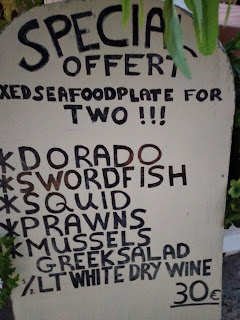 We should know better than try the 'specials board' but once again it was seafood at a reasonable price.  Of course we knew from the beginning the sword fish would be frozen, the dorado from the fish farm and the prawns very small and fried. 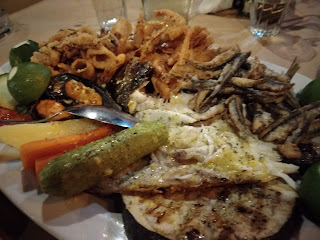 Here is the seafood platter.  Huge.  More than enough for two people.  It was good.  The slice of swordfish was juicy and with lots of salt, oil and lemon.  The dorado was delicious, though I hope it did not come from our fish farm underneath the sewage plant.  The shrimps were well fried and crispy.  There was a generous portion of kalamari (squid) as well, half a dozen steamed mussels with the necessary olive oil and lemon juice, some small fried fish which we ate whole, heads, bones and all, some marinated anchovy and steamed vegetables.

A greek salad was superfluous but visitors would no doubt enjoy it.  The wine was cold and we didn't get charged for an extra half kilo 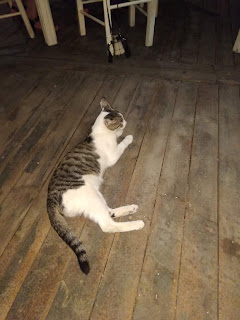 One of three taverna cats.  Waiting their due.