We survived the traffic jams on the island, the lines in the supermarket, jostling crowds along the harbour.  15th August has come and gone and the end is nigh.  This Sunday should see a snaking line of cars waiting to board the car ferry and leave for wherever, we don't care.  There will still be crowds but slowly our island will return to its sleepy norm.  Kids go back to school in a month.

From now on departees will be wishing us 'kalo himona' (good winter) and 'till next summer' when they'll all come back again.

The Dormition of the Virgin Mary is mid-summer and a very merry fiesta.  Mary did not die, 'she went to sleep and was joyfully reunited with her son in heaven'.

All over Greece there are huge fiestas, especially on the islands.  Paros, Naxos, Tinos, Ikaria with its heathful aging population, party for days on end.

The Madonna has seen Greeks through many hard times, saved Constantinople from Barbarian hordes, delivered villages from Nazi slaughter, cured and healed, not only in Greece of course. 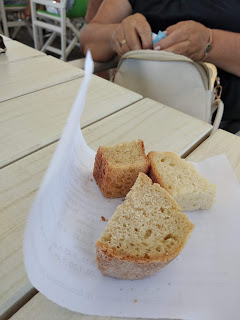 Churches on Poros were crowded for the morning service.  We went down to the waterfront for coffee before they emptied out onto streets and into cafeterias.  My sis-in-law appeared with a handful of holy bread and offered us a small piece.  It must be all eaten, not a crumb should be wasted. 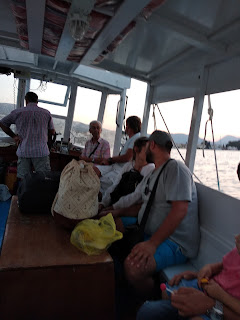 In the evening we crossed over to Galatas by small boat to honour my daughter's m-in-law whose name day it is today.  Her name is Panagiota, the Greek version of Madonna. 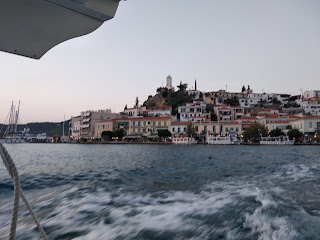 Poros from the water

There was an extended family gathering on Galatas waterfront.  So different from the hustle, bustle, noise and confusion of Poros.  We sat out among the flowers and shrubs at the tables of a souvlaki restaurant beside the sea on the other side of the channel.    There were few motorbikes or cars, no loud music blaring from cafeterias.

We ate kebabs, grilled sausages and pitta bread.  For those still on a fast there was kalamari and vegetables burgers to fill their pittes.  Some of the family fast strictly all through the year and because this celebration fell on a Wednesday they would not eat meat though fish was allowed. 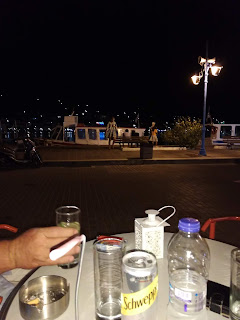 Later we took the boat back to Poros and sat on the waterfront for an after dinner drink.

At midnight there were still groups of friends and families promenading along the quay.  By 1.30, when we finally left for home, tavernas had closed and put chairs up on tables, cafeterias had empty tables but the bars down the end of town were pulsating.

23/24th August is another celebration of the Virgin Mary.  It is the first memorial, 9 days after her soul ascended.