Rio de Janeiro has the biggest carnival parade in the world.  In Greece the port city of Patras has the most colourful, vibrant parade.
Every news broadcast started with....'despite the crisis  greeks are celebrating all over the country'.
Here on Poros we have the Hunt for the Lost Treasure.

The Hunt starts on Friday with a meeting of the teams.  4-15 people of all ages, kids and adults, all just ready to have some fun.

Friday -
each team got the lyrics of a popular song and were told to make up their own words for the music.
They were also given pieces of a small hot air balloon which they had to assemble

Saturday -
here the fun starts
Each group dresses up to a theme.  It's carnival folks.
My girls and their children were all involved, the older kids in groups with their friends from school. 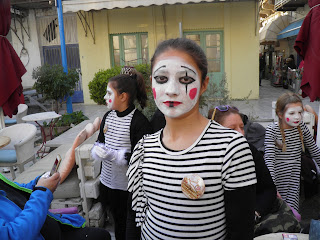 We had a group of mime artists .  Mimers? 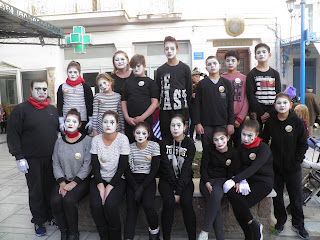 Here they all are getting ready to begin the show 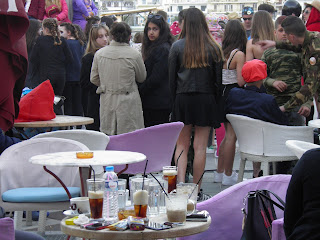 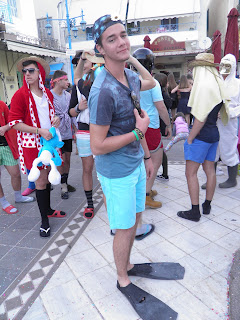 Another one of the grandchildren
All un-dressed on this chilly evening
the girls in the group were wearing flimsy summer dresses.  Goose bumps all over! 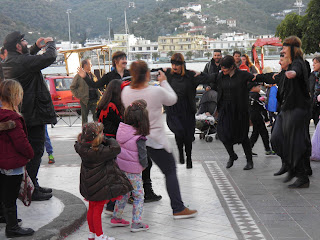 The show began with the judges dancing around the square.
Yes, this is greece.  Everyone dresses up and dances 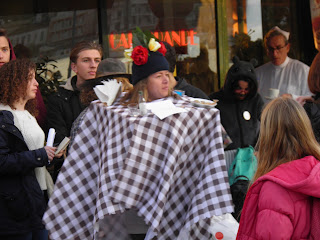 A table from the Raki Taverna group 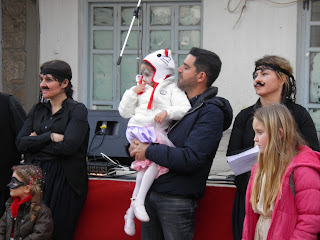 Our young Mayor with his daughter 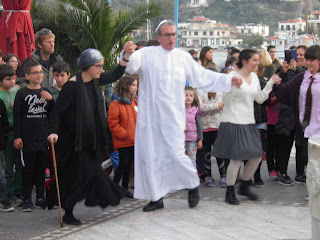 Papa John and his parishioners leading their dance around the square 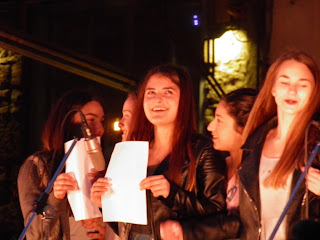 Karaoke time.  Each group had to get up on stage and sing the lyrics they had re-written.  Some were hilarious, some got the crowd up and cheering. 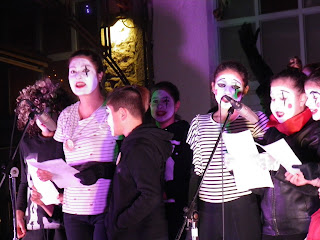 All the words were written and rehearsed in just 24 hours.  Great imagination and presentations

Sunday -
They all had nineteen riddles to answer.  One of the questions was 'how many battles did Don Quixote fight besides the one with the windmills'.

What do you call 'battles'?  The answer was '18' so they included every fight he had with everyone from sheep to innkeepers and a Biscayan.

Everyone is roped in to solve the riddles.  Teams sit in the cafeterias sending runners out to find clues and spies to see what the group next to them is doing.   Some of the riddles are extremely enigmatic.

Everyone takes part not to win but to have a lot of fun.  The Treasure Hunt is a game and as such is meant to be enjoyed by all who take part .