Sunny Christmas Days in the Square

Christmas on the island is being celebrated every day in the main square with clowns and a carousel (merry-go-round), Santa Claus, presents, music and dancing

The high pitched voice of the clown on the microphone was irritating but the children ran free while we drank coffee. The entertainment crew from Athens included a snowman, a Santa Claus-ina (female santa), and an unfunny jester who organised games for the mob 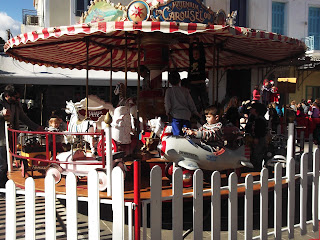 Free rides on the round-about 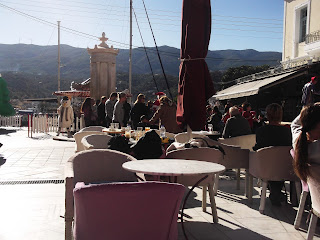 A beautiful sunny day.  Perfect for coffee in the square for mothers with toddlers.  Those without young children chose a cafeteria as far away from the babble as possible 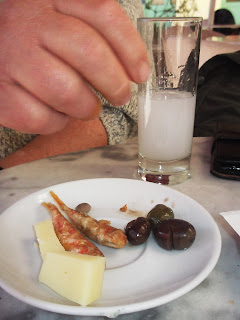 Our younger grandchildren were happy in the square and so were we.  Ouzo and a fishy meze. 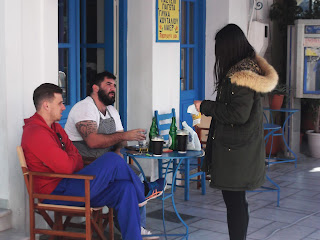 The maker of almond cakes, a local speciality, takes a break outside his shop.  He has had a busy morning baking fresh cakes for the New Year's visitors.  Note, half the population was out in thick jackets and warm clothes, but many were in short sleeves.  We sat in the sun but soon got over heated and had the waiter put up the big umbrella. 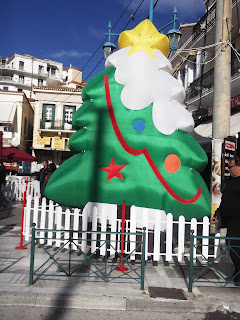 No decorated boat in the square this year or even a tree decorated with Christmas lights.  We had a blow-up Christmas tree this year.  At least it is bright and cheerful