Snow on the Acropolis??

The temperature forecast for Athens is 4oC. Cold, freezing cold.  The last time we had temperatures like that in the capitol there was also a problem with air pollution.  Heating oil is becoming a luxury item.  More and more households have wood burning stoves.  Like us.  We had central heating put in but haven't used it for a few years and bought ourselves a wood burning stove which heats the house and cooks our food as well.
In Athens they were burning any wood they could find and the fumes from burning furniture and treated wood became very dangerous.

The last time we used the central heating must have been two years ago when we had visitors from downunder in January.  We put two hundred euros of heating oil in the tank and kept the house warm, especially the bedrooms, while they were here.

We also had the wood stove then because I remember it smoking.  They must have gone home with a suitcase of smoky clothes.  Lucky it was summer downunder and excellent weather for laundry.

This year we didn't have a white xmas but we could have a white New Year.  On Poros we have gale force winds, no boats running, except a few brave water taxis across to the mainland and now and again the car ferry when there is a lull in the storm.

There is a good covering of snow on the hills opposite.

In Athens this morning there was a smattering of snow covering the Acropolis. 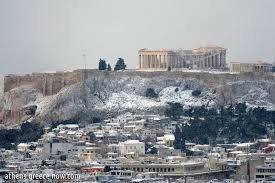 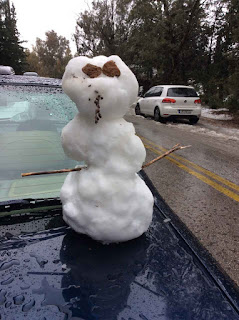 Some of my grandchildren are in Athens at the moment enjoying the Christmas fetsivities.  Most enjoyment came from a trip out into the suburbs beneath the mountains of Ymittos.  The outing of course was to throw snowballs at each other and make a snowman.  Snow.  Wow

I thought today, Friday, would be worse but the sun has appeared and snow is melting fast. Darn.