Mountain-tea, or as it is locally known, tsai tou vounou, is the common name of a plant with which Greeks make a herb tea which strengthens the immune system, fights a cold, relieves anxiety, helps with good digestion, aids memory and concentration.  It is also known as the tea of the Titans (mythical giants).    A cup a day will make you as strong as a Titan. 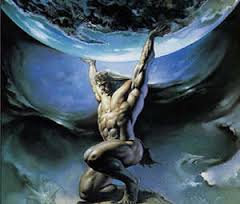 Atlas, the Titan who was condemned for eternity to hold up the world

The official names are ironwort or sideritis.  Sideritis is a greek word translated as 'he who is made of iron'.  Naturally ancient greeks knew all about it.  Pedanius Dioscorides (40 - 90AD) ancient greek physician and botanist wrote about it as did Hippocrates, the father of modern medicine. 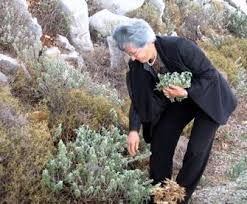 Tsai tou vounou grows at altitudes over 1,000 metres in places with very little soil, even on rocks.  It is found all over the Mediterranean and the Balkans.   A greek will gather it fresh whenever  possible. 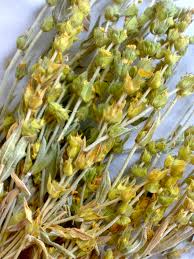 Dried leaves and flowers are used for the infusion.

Mountain tea is usually gathered in July when it is in bloom.  The leaves and flowers are hung in bundles and when dried stored, by us, in an old clean pillow case.

Here it is sold in the supermarket but most people prefer the tea that comes straight from the mountain side, either hand picked by themselves or one of their many relatives who sends it down to the city.

Boil water and add a few branches of the herb.  Let it sit and steep for about ten minutes.  Strain, add a slice of lemon or a teaspoon of honey to serve.   In the summer I made a big pot of this tea in the morning and when cold put it in a plastic bottle in the fridge and drank it during the day.

My brother-in-law drank sage tea every morning as long as I knew him.     When we lived down in the town in the family house I would be woken up by the same three smells almost daily.  First from down stairs came drifting up the odour of  rubbing alcohol as my mother-in-law sat on the edge of her bed and rubbed her arthritic hands and knees.  Next the strong aroma of boiled sage wafted up from across the courtyard as my sister-in-law infused the dried sage for her husband's morning tea.  And at 9 am every morning  I would get a whiff of fragant livani (holy incense) as my elderly neighbour across the alley way, always dressed in black and with a black scarf over her long braided hair,  took her incense burner from outside doors to inner doors saying a prayer for herself and her family.

Sage tea (faskomilo) can be quite bitter.  It definitely needs a little honey for sweetening.   Once again it is picked fresh in the summer if possible and dried by hanging in a cool place. 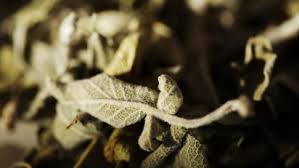 This herb is said to help keep women sweet and tranquil.  It is an antidepressant and also keeps the gums healthy.

To make the herb tea put a few leaves in a pot of boiling water.  Leave it for 5 minutes.  Too long or too many sage leaves will mean a very bitter tea.  Add honey and a slice of lemon.

Sage is very rarely used in cooking here.  I use it in stuffing which I have taught the family to love.  One of my friends however on being presented with sage stuffing in a roast chicken ran off to the bathroom to spit it out.  Here it is oregano that is prefered in the kitchen.