The end of the month again.  Time to pay certain bills or pay the consequences.  And it's pouring with rain for the second day in a row.

I took the car down into town, early to avoid the crowds at the bank.  We have set up internet banking now but are still not quite sure how it works.  K is having a few lessons from one of the children.

I visited the older child who is our accountant.  Having an accountant in the family saves us so much trouble with endlessly changing tax laws and piles of paperwork.  Doctors and lawyers are handy, rocket scientists are useless.  Encourage one of your kids to become an accountant.

I got the papers to pay the income and house tax and made it to the bank.  Only  20 in the queue in front of me so it wasn't a long wait and I people watched and listened to the gossip.  My teller smiled, greeted me by name, asked after my children. She knows me.  She went to school with my husband. 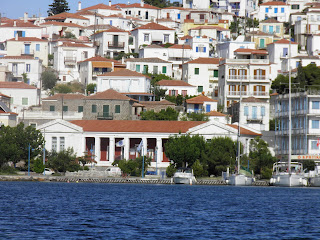 
From the bank I went on to the laundry place.  Don't think laundro-mat.  There are a couple of huge washers and dryers and the doorway was barred by a baby-gate.  Zoi's two youngest were playing on the floor.  I handed my two blankets over the gate  to her and made friendly noises to the children.  She told me how much it would cost and didn't bother asking for my phone to number to let me know when they were ready.  Zoi is a second cousin twice removed.  She said, I'll phone Elli (my daughter) when they're ready .  She knows me.   she's family.

I made a mad dash through the rain to the car and continued on to the supermarket.  At the door to greet me were the two Georges (Giorgos and Giorgos).  The manager George greeted me with a smile and a 'kalimera'.  Nephew George gave me a double air kiss on the cheeks and asked how his favourite aunt (me) was getting on.  He asked after his uncle adding that on a lousy day like this he was sure to be drinking a warming raki and setting the fire to BBQ a few lamb chops with friends. What else to do on a rainy winter's day.  Talk, discussion, exchange of views, social intercourse.  Debates can go on all day. 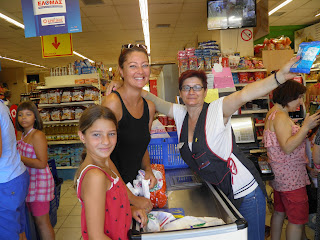 A t the supermarket check-out.  Our favourite cashier.  She took a look at the fire starters I had chosen, picked them up and took them back returning with another brand.  Cheaper and more efficient she told me.  When I asked which bottled water to buy she told me to wait till tomorrow when they would be on special.

Next stop the chemist to get my monthly prescription filled.  Nektaria  sometimes calls me Julie and then corrects herself and remembers I am Linda.  Julie is another long time foreign resident.  One of my medicines is very hard to come by.  Some months I have to wait a week or more before they can have it sent from Athens but this month she has it on hand already.  They found it early
and kept it for me. 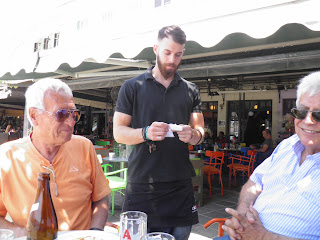 The young waiter knows which coffee I drink, waves at me when I sit down and two minutes later turns up with the coffee without me having to order.


I know I'm home even if I am a foreigner who speaks greek with a terrible kiwi accent, murdering the vowels and twisting the verb endings.  I feel comfortable with these people.  They recognise me, know my girls and their children, smile a hullo on the street, invite me to their weddings and baptisms.

K was born and brought up on the island.  He knows them all too well.  He brings the car to a screaming halt in the middle of the road to talk to one of his friends.  Walking with him along the waterfront a half hour stroll takes two hours.  Every few metres he stops for a chat or is yelled at to cross the road and shake hands with an old acquaintance.

This is the positive side of living in a small village or a tiny greek island (population in the winter around 4,000).  I was once many years ago sent a letter from Australia addressed to
Linda
Poros
Greece
Guess what, it reached me in record time.

One day I may write about the negative side.  Today all these welcomes and smiles made the sun break through those dark rain clouds. 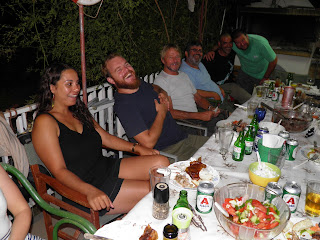